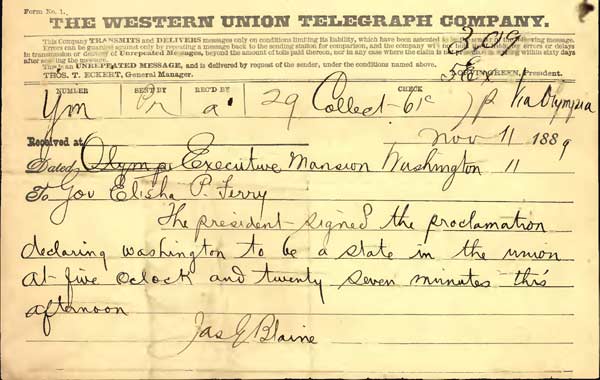 The State Archives has the Western Union telegram (above) to the state’s first governor, Elisha P. Ferry, announcing that President Benjamin Harrison signed the proclamation declaring Washington a state. 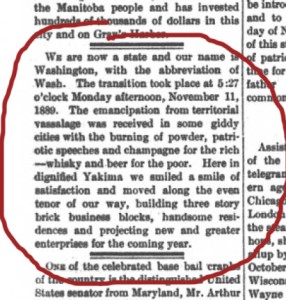 The November 14 edition of the Yakima Herald-Republic that year features a short story (see image left) about Washington’s transition to statehood.

At the time it reached statehood, Washington was drawing in people like crazy. According to historical data , 357,232 people lived in the new state in 1890. A book by Robert E. Ficken about the state’s first 10 years said it was a “five-fold increase over the 1880 figure, and a rate of growth 16 times the national pace for the 10-year period.”  Just as it ranks now, Seattle was the state’s most populated city in the 1890 census at 42,837 souls. Tacoma ranked second with 36,006, followed by Spokane at 19,922.

A glance at population stats found in Barton’s Legislative Hand-Book and Manual for 1889-90 reveal that, in some ways, our state has changed little. Just as it is now, King County (40,788) was the most populous county, followed by Pierce County (27,595) and Spokane County (25,200). However, the next  two counties might surprise you: Whitman was No. 4 in population (15,281), followed by Walla Walla (11,307).  It’s worth noting that the census back then did not count Native Americans, only “half-breeds.”

Today, we have over 6.5 million people…and counting.