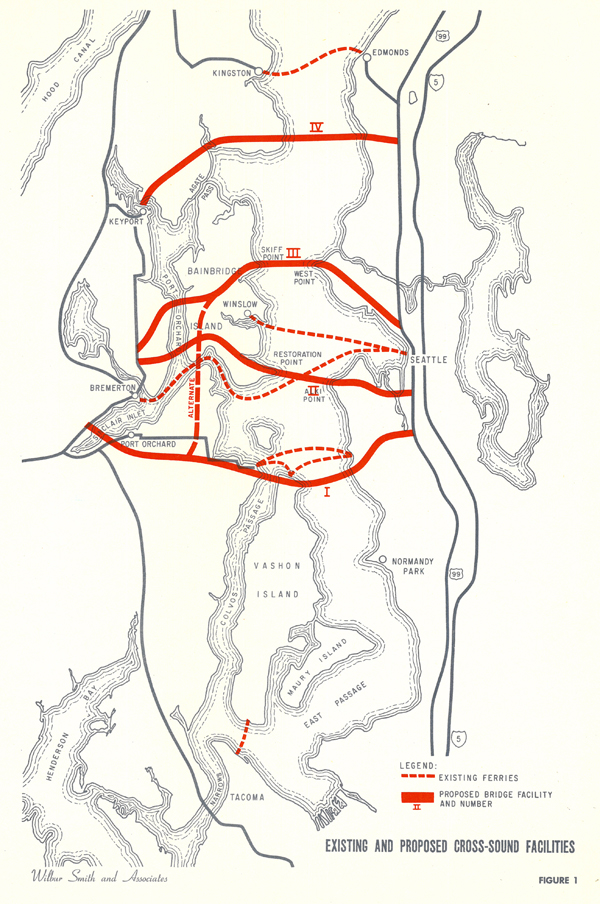 Whether you’re a commuter or tourist, taking a ferry across Puget Sound is one of those fun experiences unique to our state. It’s hard to beat the view of Downtown Seattle at sunset or dusk as you arrive on a ferry sailing from Bremerton or Bainbridge Island.

Believe it not, there were once plans afoot to replace the ferries with a series of bridges that would cross Puget Sound.  Here is a 1965 analysis on cross-sound bridge crossings prepared for the Washington State Highway Commission. And here is the Guide to the Records of the Washington Toll Bridge Authority covering 1937 to ‘77.  The guide includes this info on the grand idea:

“In 1951, Washington State bought the Puget Sound Transportation Company’s fleet of “Black Ball Line” ferries, and the Toll Bridge Authority took on the responsibility of running and funding the ferry system. Many considered ferries to be only a stopgap measure to transport people until bridges were built across Puget Sound, which would replace all ferries. Much work went into planning as many as five cross-sound bridges, as well as bridges between the various San Juan Islands, before the idea was finally dropped. The only one of the cross-Sound bridges to be built was the Hood Canal Bridge.”

Above is a color map from the 1965 cross-sound bridges proposal.

The cross-sound bridge plans and the map represent the first example in the April edition of State Archives treasures contest. Two more “contenders” will be featured later this week before we ask you and others to choose your favorite in an online poll.