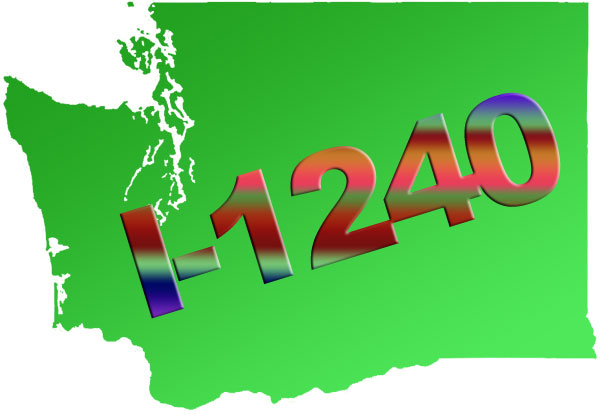 And then there were six.

Secretary of State Sam Reed has certified charter-school Initiative 1240 to the November statewide ballot. It will be the fourth time Washington voters have dealt with the issue in the past 16 years.

The measure earned a place on the ballot after submitting over 357,000 signatures that sponsors collected in a remarkably short 21-day signature-gathering drive financed by powerful backers, including Microsoft co-founder Bill Gates.

With I-1240 getting the green light, Washington voters now will decide six ballot measures: initiatives dealing with a supermajority for tax votes taken in Olympia, charter schools and decriminalization of marijuana; a referendum on a new law permitting civil marriage by same-sex couples; and two noncontroversial amendments to the state Constitution.  Voters may also cast an advisory ballot on removal of a tax preference for certain large banks; the attorney general is currently studying whether a vote is triggered by a previously adopted initiative on taxes.

Reed, the state’s chief elections officer, said the wide assortment of hot-button issues should boost voter interest and turnout in the November General Election. He said:

“There certainly is something to intrigue just about everyone. In this Centennial year of Washington voters approving the initiative and referendum process, we are seeing vigorous use of `direct democracy’ by sponsors from across the political spectrum. We are also seeing a lot of national interest in our issues – and some very large contributions.  My challenge to all campaigns is that they be conducted in a civil manner and that advertising be forthright, clear and honest. The voters deserve that.”

Shane Hamlin and Katie Blinn, state elections co-directors, said I-1240 easily qualified for the ballot, despite sponsors’ very late start in collecting signatures. Sponsors brought in 357,252 signatures, far more than the bare minimum of 241,153 needed.  Of the random sample of 10,915, inspectors found 9,337 were valid, with the rest either invalid or duplicates.  The error rate was 16.2 percent, a little “cleaner” than the average of 18 percent.

The charter school measure will be making its fourth appearance on the ballot. The concept was narrowly defeated in 2000 and lost by larger majorities in 1996 and 2004.
Voters also will decide four other measures:
•    Referendum 74, to affirm or reject the new legislation permitting civil marriage for same-sex couples.
•    I-1185, a plan by Tim Eyman to re-impose the previously approved requirement for a supermajority two-thirds vote in both houses of the Legislature for boosting taxes without a vote of the people. This concept has been adopted four times previously, but the Constitutional allows the Legislature to amend, suspend or abolish initiatives after two years have passed.
•    Initiative to the Legislature 502, decriminalizing marijuana for those 18 and older.
•    Two noncontroversial constitutional amendments placed on the ballot by lawmakers. SJR 8221 deals with stricter limits on use of bond debt for state projects. SJR 8223 deals with investments by the University of Washington and Washington State University.