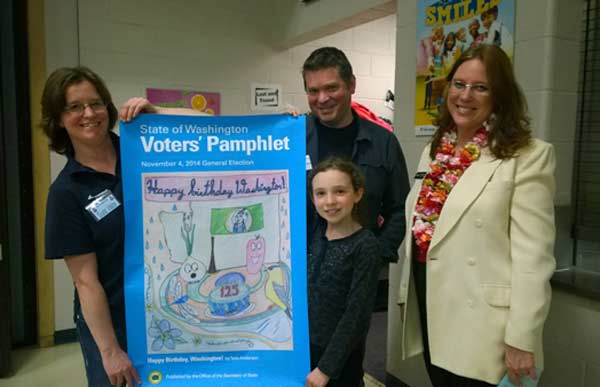 Talia Anderson stands next to Secretary Wyman and holds up her winning artwork with her parents, Tamara Keller (left) and Dean Anderson. (Photo courtesy of Jen Estroff)

When Talia Anderson joined her fellow Dry Creek Elementary School students for an assembly Tuesday afternoon, she only knew that Secretary of State Kim Wyman was going to speak there.

What Anderson didn’t know was that Wyman really was there to inform everyone that the Port Angeles fifth-grader had won this year’s Voters’ Pamphlet Art Contest. Anderson’s face lit up when Wyman made the surprise announcement, which prompted loud cheers from everyone gathered.

Talia’s winning artwork is here and at right. 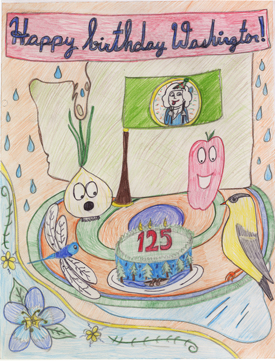 This is the second straight year that Wyman visited the art contest winner’s school to make a surprise announcement about who was chosen.

“Seeing Talia’s reaction was great,” Wyman said afterward. “I really enjoy making the announcement in front of the student body and teachers because it’s a special accomplishment that the entire school can celebrate.”

Tamara Keller, Talia’s mother, enjoyed watching her being recognized by Wyman as the art contest winner. “I am still in shock that she won. It’s such an honor to have her artwork picked to be on the cover of the pamphlet,” Keller said.

The Office of Secretary of State invites fourth- and fifth-graders to enter the annual contest, which began in 2002. This year’s theme is “Happy Birthday, Washington!” to celebrate the 125th anniversary of statehood. Washington was admitted as the 42nd state in the Union by President Benjamin Harrison on Nov. 11, 1889.

This year’s contest began in February and ended in April. About 300 students submitted entries. After Elections Division staff selected about 20 finalists, Wyman chose Anderson‘s entry as the contest winner.

“I loved so many of the entries because they were colorful, well drawn and creative. It was really tough to choose one, but Talia‘s artwork was the best. I congratulate her and all of the students who submitted artwork for this year’s contest,” Wyman said.

Anderson’s artwork will be featured in the more than 3.2 million copies of the statewide Voters’ Pamphlet, which will be sent to all Washington households prior to this fall’s General Election. It will be included in the 2014 Time Capsule that will be filled after the 1989 Centennial Time Capsule is opened at the 125th Anniversary event Nov. 11 at the Capitol.