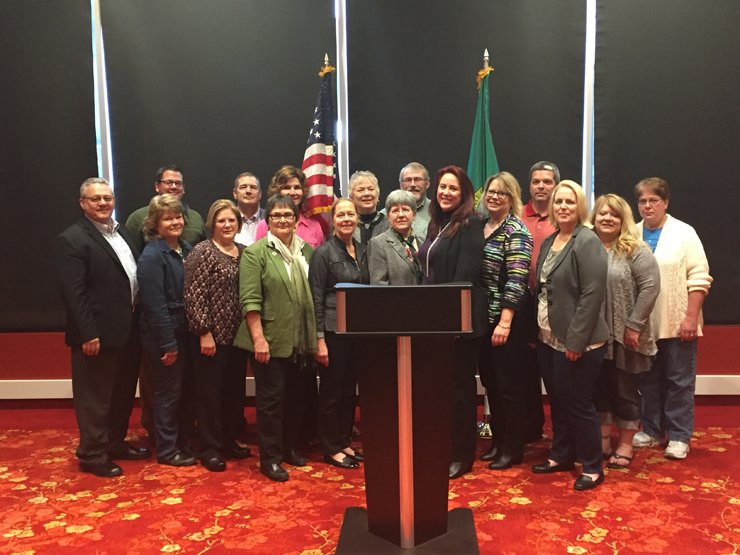 Secretary of State Kim Wyman and county election leaders have announced a bipartisan proposal to clear the way to check for citizenship of people who want to register and vote in Washington.

At a news conference in Spokane on Friday, Wyman and county partners proposed legislation for the upcoming session that would adopt the REAL ID Act for Washington. That would mean people would have to present citizenship verification to get a driver’s license, and election administrators could then do a citizenship check at the front end of the process.

The package also includes a plan for automatic voter registration of those who provide documentation of citizenship, with an opt-out provision. Oregon currently runs such a program. Without a citizenship check, that’s not possible in Washington, since both state and federal law ban registration and voting by non-citizens.

“Our package is reasonable; it’s long overdue.  Our current laws are not working the way we need them to.”

During this past week, questions were raised about the citizenship of Arcan Cetin, who confessed to murdering five people at Cascade Mall in Burlington. He registered in 2014 and voted in three elections. On each of those occasions, he affirmed that he was a U.S. citizen and met the other qualifications to be a voter. The penalty of registration and voter fraud is a prison term of up to five years in prison and a $10,000 fine.

“This issue pales in comparison to the tragedy of five innocent lives lost. But when the citizenship of Mr. Cetin was publicly called into question as part of the story, it shined a bright light on the fact that under current state law, as election administrators, we are not able to confirm the citizenship of any registered voter.

“This week’s situation has highlighted a problem with current law. We need to verify citizenship and the other requirements for voting at the beginning of the voter registration process – rather than retroactively scrutinizing individual registrations through a lens of partisanship or events, like those of this past week.

Following action in New Mexico recently, Washington is now one of only three states that have not moved to comply with the federal REAL ID Act. States that are in compliance collect and track citizenship information at their driver’s license agencies, and can screen the data for non-citizens.

“That’s the way our laws read, and, no, it doesn’t make sense!” Wyman said. “The Department of Licensing is not authorized or directed by state law to require this.  The Secretary of State and the auditors of Washington are not permitted to demand proof of citizenship – and so there is no way to verify.

“I find this completely unacceptable.  Our laws are not working the way they need them to. We need to construct laws and processes to verify voter eligibility on the front end of the voter registration application. We are here today to propose some sensible and concrete solutions to correct this problem. The time for action is now. People are understandably frustrated about this situation and we are frustrated as well. It’s time for action in the January session.”

Wyman noted that the federal REAL ID Act of 2005 is the law of the land and the Department of Homeland Security has been pressuring every state to comply. DHS has announced that Washington will not be granted additional waivers and that beginning in 2018, state residents will need a REAL ID-compliant driver’s license or ID card to board a domestic flight. Wyman added:

“Once we have done the citizenship check, and we can verify all four requirements for voter eligibility, we would automatically register these voters, with an opt-out provision,” she said. “Many have urged us to enact automatic voter registration – like we have seen in Oregon, California and a few other states. Without a citizenship check, I’m unwilling to support that concept. However, if we can verify all four requirements of voter eligibility, why wouldn’t we register these people?

“The people of Washington and their election administrators across the state want to assure that only citizens who meet the requirements to vote are registering and voting. I look forward to working with auditors, elections directors and administrators, legislators, all of our stakeholders, and the Governor to enact these changes.”

Wyman was joined by a number of county auditors, Democrats, Republicans and nonpartisan, in calling for the reforms.