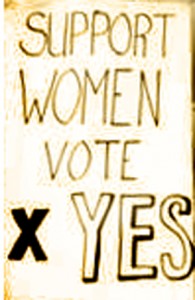 Word filters north of the Oregon-Washington border that Oregonians, too, are busy organizing a big celebration for their state’s centennial of women gaining the right to vote.  (Hey, no smarty-mouth comments from chauvinists out there!).

As faithful readers of From Our Corner know, Washington already is into the centennial, since our Legislature approved  suffrage in 19-aught-nine and the male voters approved it in November of 1910.  Washington’s celebration is led by the Women’s History Consortium, the Washington State Historical Society and a panel of state, county and historical society folks  coordinated by Secretary of State Sam Reed.  The Society and Consortium, led by historian Shanna Stevenson, collaborated on a stellar exhibit at the state history museum in Tacoma (and now on the road in Wenatchee and touring for the next year.)  Other celebrations are occurring  around the state and a big blowout is planned at the Capitol next November.

Meanwhile, back to Oregon.  They’ve  begun planning for a 2012 suffrage centennial.  The Statesman Journal in Salem reports that more than 50 folks showed up at the state Archives to begin brainstorming.

Their co-chairs are both women of great achievement: Norma Paulus, former Republican legislator, secretary of state (first woman to hold statewide elective office when she was sworn in in 1977) and state school chief for nine years; and Barbara Roberts, a former Democratic legislator who succeeded Norma as secretary of state and then was elected Oregon’s first female governor in 1990. Both remain quite active in the civic life of Portland and Oregon.
They’re looking at a variety of commemorations and a traveling exhibit, according to state Archivist Mary Beth Herkert.  She says one point they’re making is that it took six tries, beginning in 1884, to win ballot approval.