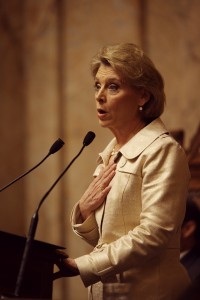 Amid speculation that Governor Gregoire could be President Obama’s pick for U.S. Solicitor General , our elections folks are getting bombarded with questions about succession, special elections and so forth.

“If the Governor were to resign, the following would apply.

The “duties of the office shall devolve upon the  Lieutenant Governor” without any action by anyone.

If the Governor were to resign May 31 or earlier, there would be a special filing period and the position would appear in both the primary and general elections this year. This “unexpired-term election” would be to fill out the remainder of the term.

Ordinarily, for other offices, a vacancy between June 1 and August 16 would result in a special winner-take-all election in November.  For the office of Governor, the state Constitution (Article III, Sec. 10) sets out a longer time period for triggering an election for an unexpired term.   If there is a vacancy in the office of Governor October 3 or earlier, there will be a special filing period and the position will appear in the General Election.  This deadline of 30 days before the General Election (November 2) is set in the State Constitution:  “. . . if a vacancy occurs more than 30 days before the next general election occurring within 2 years after the commencement of the term, a person shall be elected at such election to fill the office of Governor for the remainder of the unexpired term.”

If there is a vacancy in the office of governor after October 3, the Lieutenant Governor would continue to serve and the position will not appear in the 2010 General Election.

If the Lieutenant Governor is unable to serve, the line of succession is:  Secretary of State,  Treasurer, Auditor, Attorney General, Superintendent of Public Instruction, Commissioner of Public Lands.