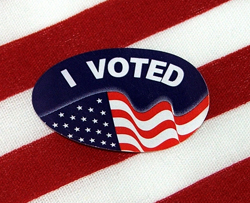 If you voted in last week’s Primary, pat yourself on the back.

The word from the State Elections Division is that voter turnout for last week’s Primary Election cracked the 40 percent mark today, exceeding the 38 percent turnout that Secretary of State Sam Reed predicted.

According to Elections Director Nick Handy, it’s likely that the final turnout for this primary will be around 41 percent. Regardless, this sets a new modern record for a Washington State Primary held in an even-numbered year in which there was not a presidential election, Handy said. Washington’s 2006 Primary turnout was about 38.8 percent of the state electorate. The 2008 Primary, which was the first to use the Top 2 system, resulted in 42.6 percent voter turnout.

To see the 2010 Primary voter turnout figures yourself, or to see the latest Primary results for the U.S. Senate contest and congressional, legislative and judicial races, go here .

UPDATE: You have to go back to 1970 (45.9 percent) to find a higher primary voter turnout for this type of election year.