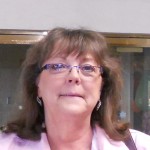 In times like these, folks need all the friends they can get.  That goes double for librarians who work in the state’s correctional and psychiatric institutions.  Since the 1960s when the U.S. government provided start-up funding to establish libraries in state institutions (ILS) ,  support for these critically needed libraries has plummeted.  As of October 2011, funding for the state’s ILS collections was terminated.

This crisis is not new to Gayle Shonkwiler, library associate at the Coyote Ridge Corrections Center.  She supervised school libraries at an elementary and high school in Pend Oreille County.  She learned early that if a librarian doesn’t have funds, that librarian better have friends.   Following the success of a 4-H fundraiser she managed, Gayle decided to write letters to popular writers.  Many writers were pleased to hear from a school librarian and they responded by sending small gifts of posters and bookmarks for her library.  Next she had to take the big leap.  She applied for a Dr. Seuss grant and won.  Her library and the whole school got involved with the fun.  Kids were served green eggs and ham in the cafeteria.  A reporter from the Newport Miner wrote a story when the school assembled for a Dr. Seuss birthday bash.  After, Gayle shared her grant writing success with the local county library.

In response to the Coyote Ridge funding crisis, Gayle started a letter-writing campaign in partnership with ILS manager Laura Sherbo.  To date, Gayle has written to nearly 200 publishers asking for “in-kind” support.  Companies have shown themselves to be generous and supportive of small, struggling libraries.  Those companies include Orca Books in Canada.  The manager contacted Laura Sherbo and offered like-new books from their stock.  Copper Canyon Press of Port Townsend sent five boxes of poetry books.   The Gibbs Smith Publishers—a company that specializes in fun, whimsical books–sent enough books for every ILS branch.  HarperCollins shipped  J. A. Jance mysteries that are set in Washington State.  Hunter House sent books about domestic violence prevention.  The Parenting Press sent guidance books for children and adolescents. Bilingual Books of Seattle sent popular titles from their self-instruction inventory.   There are several boxes of books on the way from Sasquatch Books in Seattle. The National Ovarian Cancer Coalition and Pacific NW Chapter of Multiple Sclerosis Foundation sent several educational pamphlets.

Librarians find out who their real friends are during hard times.  Thank you, Gayle. And thank you to the publishers who have responded so generously to the ILS program!