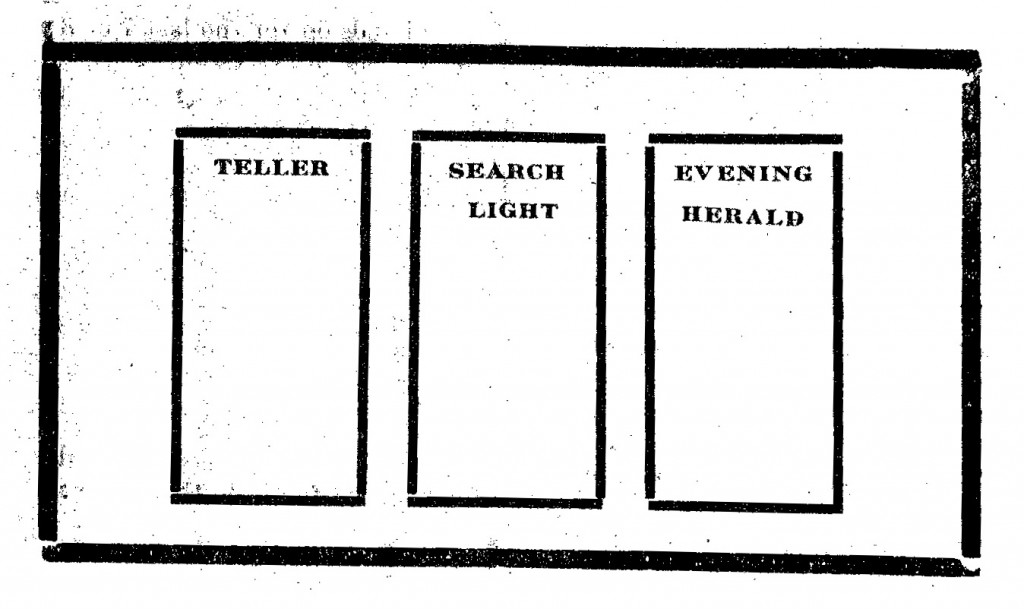 The editor of the Clarkston Republic appears to be able to barely contain his gloating while reporting on the demise on a rival newspaper. I found this on page one, top of the fold, July 10, 1913:

“Last Saturday evening the Herald Publishing company suspended publication of the Clarkston (daily) Evening Herald, after a brief career lasting only six weeks. It came as a total surprise to citizens of the city as from appearances and declarations it was to be a very permanent institution.”

“A strenuous subscription campaign had been carried on by the paper which closed Saturday night. For this they were offering prizes to the several girls who would secure the highest number of paid up subscriptions, the grand prize to be a free trip to Yellowstone Park with all expenses paid for two, while the other prize consisted of three $60 diamond rings and three watches. Subscriptions were taken at $5 per year, and for a shorter or longer time accordingly. The final result as announced was Nellie Bittle, first, Milicent Lahm, second, Allie Malone, third and Miss Jones of Asotin, fourth.” 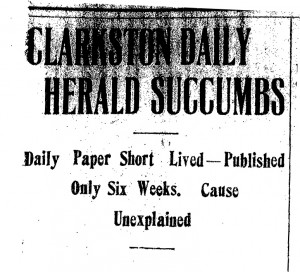 “Mr. E.D. Griffin, proprietor of the defunct concern positively refuses to make any public statement to the people here and elsewhere who have paid for the paper for various lengths of time, only stating that it is a very unfortunate affair and that it will do no one any good. Other than this he will not say regarding the likelihood of the prize winners receiving their prizes, of what happened to the subscription money or what is to be done about the good United States money that has been paid the concern for advance subscriptions, so that the only particulars that can be given is heresay which are as follows: A Mr. W.F. Heght it seems was managing the subscription campaign for the Herald and had a good deal more to do with the handling of the money than good business management generally allows a stranger, and on Saturday night when the contest closed, instead of a settlement of the affair being effected then it was deferred until Monday morning, before which time it is said that Mr. Heght made a hurried get away, taking with him all the funds that had been collected on advance subscriptions, the amount of which seems to be in doubt. It is also said that a warrant has been issued for his arrest but of this Mr. Griffin will state nothing.”

“Another story is current that the suspension came from a lack of the Chamber of Commerce, of which J.E. Hoobler is president, to make good a promise to secure a certain number of subscriptions, but the Chamber denies ever making any definite promise along this line however.”

“As soon as Mr. P.S. Pease, district salesman for the American Type Founders company heard of the affair he hurried to the city to make an adjustment of affairs concerning the equipment which was secured from his company, and it is likely they will have charge of the disposition of most or all of it.”

“The situation is the main topic of conversation all over the community and it is considered to be of much more discredit to the city than never to have started the institution. Many were dissatisfied with the news service from the first, both local and telegraphic.”

“Many are the reasons thought to be the real cause of the suspension and many are demanding the management make some explanation, but only time will tell what developments will be made in the case. At all events it is a sad affair for it means a loss to some, and from appearances it will be the ones who put up the money for the advance subscription.”

What really caught my eye in this article was an accompanying crude illustration of three newspaper titles in coffin shaped boxes, stood up on end like the corpses of dead outlaws on display on a dusty storefront in the Old West. The Clarkston Republic’s vanquished competitors run from the obscure to the cryptic.

The Teller was apparently the Lewiston Evening Teller. It ran from 1903 to 1911. Several libraries in Idaho and Utah hold copies.

The Evening Herald apparently lasted only six weeks in 1913. It was edited by Edwin DeWitt Griffin (1873-1949) who later moved to Long Beach, California, continuing to work in the newspaper business. So far as I can ascertain, no copies of this newspaper can be found in any library, either in hardcopy or microform. But at least we know it existed, who published it, where it came from, and how long it lasted.

The most mysterious of all is the Search Light. In searching all the usual places, I can find nothing confirming there was a such a title in the Clarkston-Lewiston area in this time period. Not in OCLC, not in Ayer’s, not in local histories. In fact, this coffin drawing is the only evidence I have proving such a newspaper existed. I don’t even know if it was published in Clarkston or Lewiston. But I’m betting someone out knows all about this title.

If you have any information on, or better yet, actual copies of these two lost newspapers, give us a call here at WSL.

There was one rival the Clarkston Republic was unable to bury: The Lewiston Morning Tribune, still around today and now known simply as the Lewiston Tribune.

Asotin County’s days of yesteryear have been captured by our Washington Rural Heritage Project.