Random News from the Newspapers on Microfilm Collection: Creston Celebrates the Capture of Harry Tracy, “The Last Desperado” 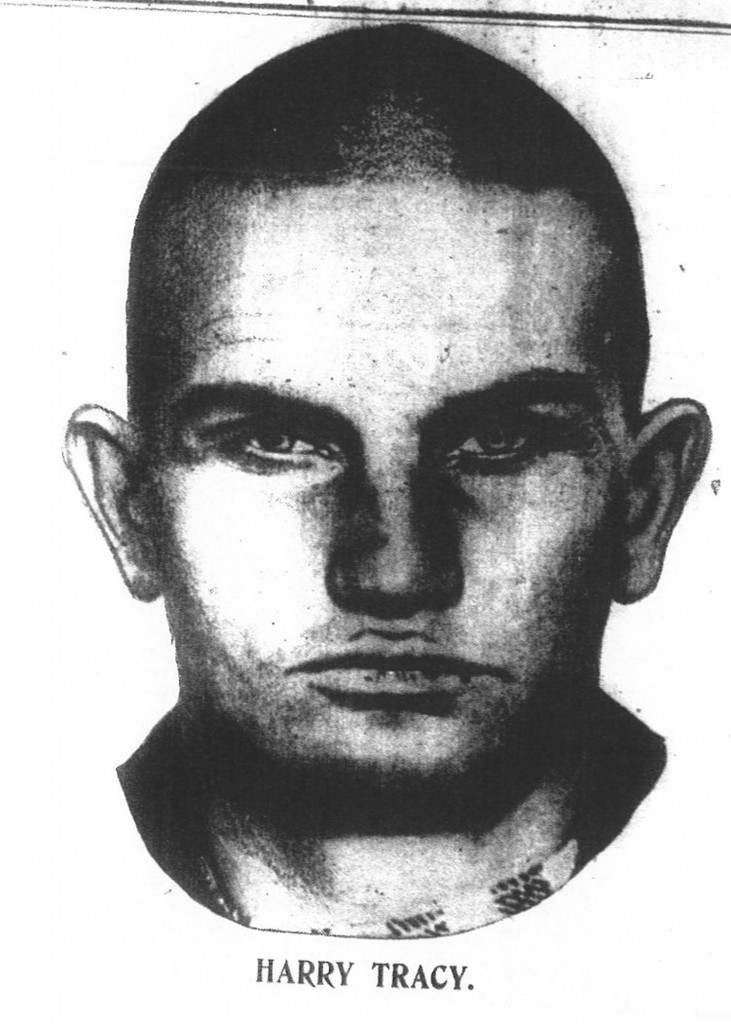 So this week when I grabbed a reel at random from the Newspapers on Microfilm Collection, I found myself viewing the Creston News, a paper covering the happenings in the area of Creston, Washington from 1901-1941. As fate would have it, within a minute or two I accidentally stumbled across an article covering what was probably the most famous event ever to take place in this Lincoln County neighborhood– the capture of Harry Tracy, one of the most notorious killers in Washington State history.

Tracy was a career criminal who has been regarded as the last of his kind by several historians. He was an outlaw who performed his misdeeds on horseback and crossed paths in the course of his journeys with authentic bad men of the Old West. His biography has yet to be fully sorted out, thanks to a wave of sensationalistic dime novels that followed immediately after his death. Jim Dullenty points out the most persistent myth concerning this murderer in his book Harry Tracy, the Last Desperado (1989), “Harry Tracy was almost certainly not a member of Butch Cassidy’s Wild Bunch though he has been reported as such so many times it is nearly accepted as fact. It is true, however, that at some point during his travels in the West he may have been in Wyoming or Colorado long enough to have met some members of the gang. The idea that Tracy was a member of the Wild Bunch is the single hardest myth to knock down primarily because so many respected writers have made the claim.”

However, calling him “King of Bandits” was probably an accurate regional description of him at the time of this news story. No other criminal in the Northwest was as famous in 1902.

Rather than being a representative of the Old West outlaw, Harry Tracy’s sociopathic resume of perhaps as many as two dozen murders really anticipated the modern rampage killer. After his escape from the Oregon State Penitentiary, his ability to elude authorities for two months terrorized the Pacific Northwest as he killed anyone obstructing his way, starting with three guards at the prison. But his fugitive flight came to an end August 6, 1902, in a farm field a little southeast of Creston.

This article comes from the Creston News, August 8, 1902. It includes a truly chilling graphic of Tracy’s mug shot. I have not seen this piece cited in any of the Tracy bibliographies:

THE GLORY IS DUE TO CRESTON MEN ALONE.

“Harry Tracy, after eluding the officers of Oregon and Washington, officers credited with courage and capability, for two months, finally came to the terminus of his remarkable career at the hands of five resolute men of the village of Creston.”

“It may have been fate that led the outlaw into Lincoln county and into the vicinity of Creston; it was not fate that delivered him into the hands of this particular band of avengers of his many misdeeds. These men went about their work as others who failed should have done. When they received information of the whereabouts of their man they immediately drove to the neighborhood disposed of their team and made a direct approach on the rendezvous of the bandit without beating about the bush and consequent loss of time, with the opportunity it might afford their man to learn of their approach and prepare to defend himself. As it was managed, he was surprised and taken at a disadvantage. The result was an easy victory. It is just as well to state at this juncture that it would be difficult to pick up in any given locality five men better fitted for the work done than were this quintet, C.A. Straub, Dr. Lanter, Maurice Smith, Joe Morrisson and Frank Lillengren. They possess the courage, self-possession and knowledge of the use of the gun necessary for the undertaking.” 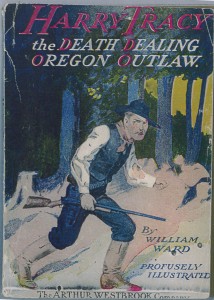 “The story of the tragedy, as briefly as we can tell it, is this. On Sunday afternoon Tracy, who was camped and eating his supper on a ridge near the Eddy ranch, south of Fellows’ siding, which is eight miles east of Creston, invited a boy named Goldfinch, who was passing, to stop and take supper with him. This was declined, and he was then ordered to go ahead to the Eddy place and announce that Tracy was coming. The program was carried out as ordered. When the place was reached the latter took charge of matters in characteristic way, the details of which go beyond our present limits of space, but which have been given thru the Spokane dailies. The boy was allowed to go with the threat that if he told of Tracy’s whereabouts before Wednesday the latter would kill both the Eddys and Goldfinch.”

“Monday Tracy assisted the Eddy’s in their farm work, took a bath and shaved himself. The boy went back Monday evening to see if the Eddys were still safe. He was allowed to go again, and the next morning came to Creston and telegraphed a long story to Sheriff Gardner at Davenport. He attempted to keep the matter from people here, but it got out and the party was promptly organized and left a little after noon.” 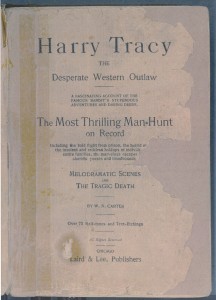 “Arrived at Mrs. Anderson’s ranch, two miles north of Eddy’s ranch, they put up their team and walked acrossthe country. They came to the ranch undiscovered, and from a rise of ground saw Tracy in the barnlot. The first impulse was to shoot and investigate afterward. But the possibility of making a mistake caused them to hesitate. Two of the party then went to Mr. Eddy, who was cutting hay in a field near the barn, for information. They were informed that the man seen was Tracy. They then boldly approached in open, but undiscovered, until within fifty yards of Tracy who was helping Eddy, who meanwhile had driven his mower into the barn lot, to unhitch his team. They covered him with their guns and commanded hands up. Tracy instantly stepped behind Eddy and asked who these men were. Eddy had not seen the men in that direction, and Tracy pointed them out. Eddy said he supposed they were hunters. He then got a horse between himself and the guns and commanded Eddy to lead the horse to the barn door. This was a shelter while reaching his own weapons, which were in the barn. When near the door he jumped into the barn and soon emerged on the opposite side with rifle and revolver. He fired two or three shots at his pursuers, but without effect, and then ran down a draw toward a cover of rocks and bushes, followed by a shower of lead. He dodged behind a projecting rock and again returned a few shots, some of which came uncomfortably close but did no harm. Then he threw himself into a field of wheat and crawled away, the men firing a volley into the grain whenever they saw it shaken by movements.”

“Then another shot was heard, and the rest was silence. The desperate man had sent a ball from his revolver thru his own brain. It was now near dusk.”

“The field was guarded thru the night, and Wednesday morning the trail was taken up again. A little way into the field Tracy was found cold in death. The discovery was made by Smith and Lanter, who started at the rock. His right hand grasped his rifle, while the left, the thumb on the trigger, was under his face. A ghastly hole just above the bridge of the nose, torn by a 45-caliber ball, told the story of the end of the tragedy, the fall of the curtain.” 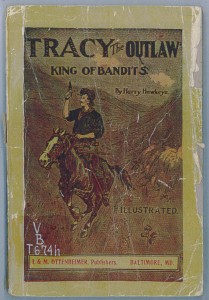 “Examination showed that Tracy had suffered two injuries, either of which would no doubt soon have proved fatal. The right leg was broken above the ankle by one shot, and the tibial artery of the same leg was cut by another. This wound, without surgical care, would have caused death from loss of blood. He had vainly attempted to stop the hemorrhage by buckling a strap tightly round the limb.”

“Thus ended the unequal battle of one man against mankind, or more specifically against the officers of several counties of two states. The man is not an ordinary character who has eluded for two months men and blood hounds, living a life that could not be but one of constant and nervous strain as well as privation.”

Where Honor Is Due

“The honors for the capture of the outlaw belong to Creston, and her alone. The other men in pursuit were earnest and vigilant no doubt, but they were miles away when the battle was fought and won. Tracy had been dead for hours before Sheriff Gardner and his deputies arrived at the scene. Our men could not in justice to themselves or to anyone else, admit their claims to any participation in the fight, or as contributing anything to its success. And Sheriff Gardner, after some parley, agreed to acknowledge their claim to the higher authorities. The body was then turned over to him and he had it conveyed to Davenport where it was prepared for shipment to Salem, Oregon, and was viewed by hundreds of the curious from all available points. The coroner, Dr. Moore, held the remains until yesterday afternoon, when they were turned over to deputy Straub. Sheriff Gardner made a determined effort to get possession of the body, but found himself up against the men who got Tracy, and who stood by their rights. Serious trouble was probably avoided by disinterested parties who prevailed on Gardner to abandon his attempt.” 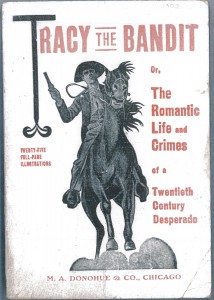 “The body was taken to Oregon last night in charge of Straub, Lanter, Smith and Sheriff Cudihee, representing Governor McBride.”

Between the lines in that bit at the end about who had possession of the body was the question of who would get the reward money. Naturally the issue went to court, with the Creston citizen posse winning the case in 1903 instead of the Sheriff.

A wave of Harry Tracy pulp novels surfaced after he died. Several of these are part of the Washington State Library collection, along with serious later works by historians. My favorite work about the Tracy capture is “I Touched Harry Tracy’s Corpse” by Charles M. Anderson, M.D., an article in the quarterly The Pacific Northwesterner v. 17, no. 4 (Fall 1973). Anderson gives a colorful firsthand account of the scene in Davenport when Tracy was killed.