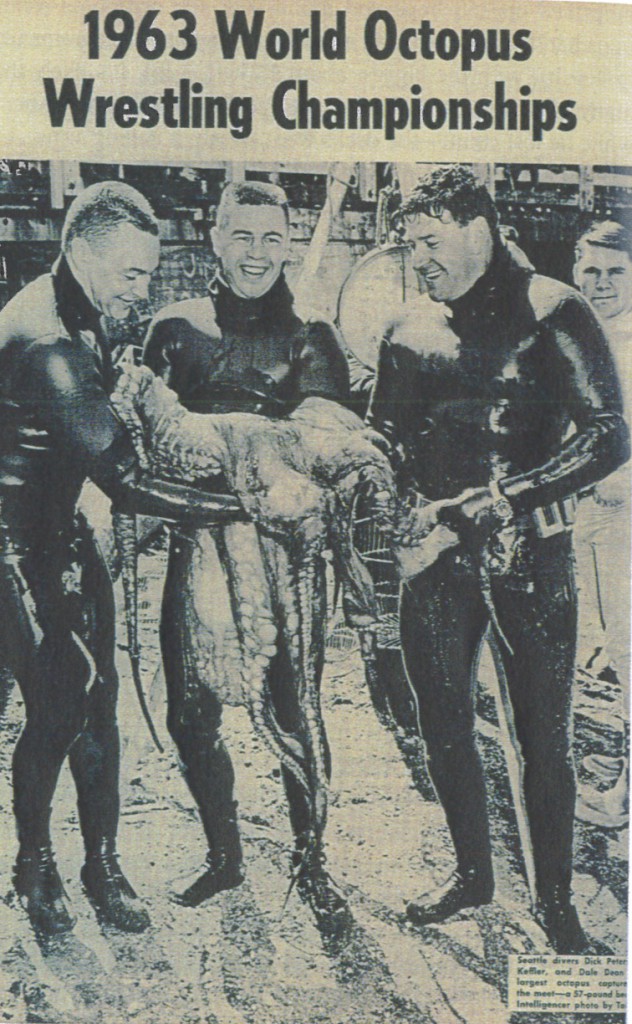 From the desk of Steve Willis, Central Library Services Program Manager of the Washington State Library

What was a life and death struggle in 1913 became a weird form of recreation in Puget Sound in the 1950s-1960s and then an environmentally taboo practice by the 1970s. I am talking, of course, about octopus wrestling.

Although the story is set near Anacortes, the article was found at random in the Camas Post, August 15, 1913. A note before we start, the term “Devil Fish” was once used to describe the octopus:

Diver is Seized By Octopus in 85 Feet of Water.

Only After Desperate Struggle of 45 Minutes Is Marine Monster Conquered.

“Seattle, Wash.–To fight 45 minutes against a giant octopus 85 feet below the surface of the water, striving desperately to break the relentless grasp of the slimy arms which held him, and at the same time talking over a telephone to his attendants in a scow on the face of the water, telling them of the battle as it progressed, and finally to escape uninjured was the experience of Walter McRay, deep-sea diver, at Alden Banks, near Anacortes.”

“James E. Hill, was in charge of the assistants to McRay, and tells the story of the 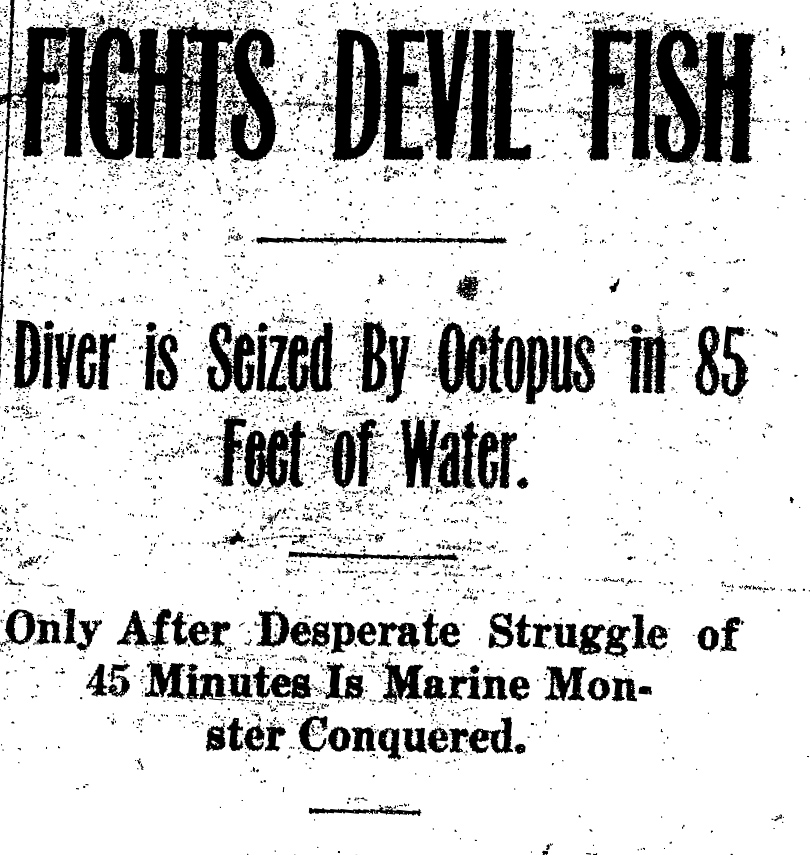 “During the battle with the devil fish Hill stood with the telephone receiver to his ear, listening to the graphic bulletins as they came to the surface from the man ‘on the firing line'”

“The telephones used by divers allow the men underneath to talk to the man on the surface, but the latter cannot reply, and the only encouragement Hill could offer to the diver was an occasional tug on the signal line.”

“McRay was engaged by the Apex Fishing company to examine one of its fish traps on Alden Banks. At the trap the water was about 75 feet deep. He had followed the lead for some distance and was in water about 85 feet deep, when his foot was seized in the vise-like grasp of a giant octopus. At the same time the big, slimy fish emitted a large amount of ink, turning the water in the vicinity absolutely black and making it impossible for the diver to see his assailant.”

“Hill, who was on the surface with the telephone receiver at his ear, heard a slight exclamation from the man below, followed by a violent pull on the line as the diver was thrown off his feet. A few seconds later McRay said over the telephone: ‘Now, keep cool. Don’t get excited. A devil fish has got me.'”

“‘When I heard those words, spoken by McRay as calmly as though he were greeting a friend on the street, my hair stood on end,’ said Hill.”

“‘The octopus, immediately after tripping McRay, had thrown two more tentacles about the diver, one around his body, binding his left arm tightly to his side, and the other between his legs, reaching up his back. The head of the fish was on McRay’s chest.'” 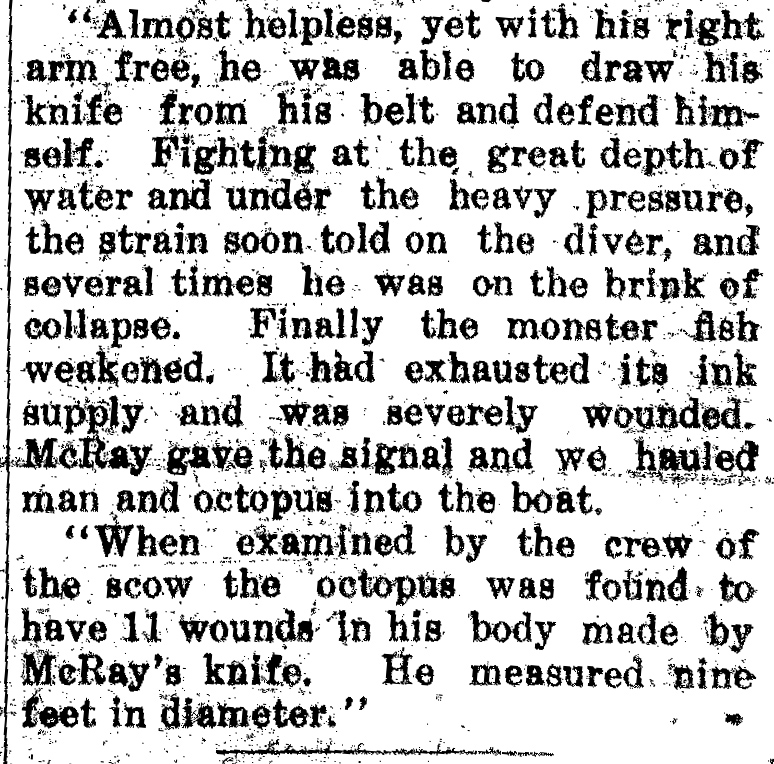 “‘Almost helpless, yet with his right arm free, he was able to draw his knife from his belt and defend himself. Fighting at the great depth of water and under heavy pressure, the strain soon told on the diver, and several times he was on the brink of collapse. Finally the monster fish weakened. It had exhausted its ink supply and was severely wounded. McRay gave the signal and we hauled man and octopus into the boat.'”

“‘When examined by the crew of the scow the octopus was found to have 11 wounds in his body made by McRay’s knife. He measured nine feet in diameter.'”

Now let us fast forward to the post-WW II era. The authors James A. Cosgrove and Neil McDaniel describe an athletic activity even more bizarre than golf in their book, Super Suckers : the Giant Pacific Octopus and Other Cephalopods of the Pacific Coast (2009):

“The rather strange sport of octopus wrestling had its beginnings in Washington state. Using only snorkelling gear, teams of divers had to repeatedly dive, locate octopuses and try to bring the most animals to the surface, where they were weighed. The activity became quite popular and was even televised with up to 5,000 spectators on hand. Afterward the octopuses were eaten, given to a local aquarium or returned to the sea. In April 1963, more than 100 divers took part and captured a total of 25 giant Pacific octopuses, the largest weighing 26 kg. (57 lb).”

“Bill High, a long-time Washington diver and scuba instructor, recalls the early days. ‘The Puget Sound Mudsharks began the World Octopus Wrestling Championship in either 1955 or 1956. When I joined the club in 1957, the competition was well established. I think the last event was held around 1968. My three-man team took first place in 1961, third place in 1965 and fourth place in 1964. Information about octopuses appeared in Skin Diver magazines from the late 1950s and into the 1960s. My research on the giant Pacific octopus was featured in the December 1971 issue of National Geographic magazine. In the first years the competition was breath-hold only, but by 1960 there was a scuba component. Most of the annual competitions were held at Titlow Beach in Tacoma, Washington.'”

In 1972 the Washington State Dept. of Fisheries released a publication entitled Diving for Octopus in Puget Sound, which begings with: “SCUBA diving for the large octopus (Octopus appolyon or hongkongensis) can be a challenging and rewarding experience. Although the octopus is timid, it does posses the capability to harm a diver, and techniques used in capturing the caphalopod should be known to the prospective ‘octopus wrestler.'”

But by the time the 1970s were over, the recreation of octopus wrestling had died out as Washingtonians became more ecologically aware.

Although Ringo Starr supposedly thought up the song Octopus’s Garden while in Sardinia in 1968, I’m betting the real story is that it first entered his brain in 1964, when the Beatles visited Seattle during the heyday of octopus wrestling. Ringo probably first got the idea when the Fabs were fishing in Puget Sound from their window at the Edgewater Hotel.

One thought on “The Devil Fish and Octopus Wrestling”