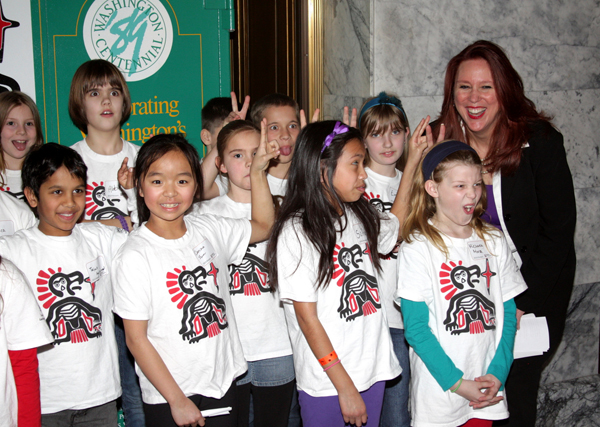 Secretary Wyman has fun with some of the new Capsule Keepers in front of the Centennial Time Capsule in the Capitol. (Photos courtesy of Benjamin Helle)

Washington‘s Centennial Time Capsule was sealed for the next 25 years during a ceremony at the State Capitol Sunday afternoon. Letters and artifacts collected over the last year were added to the capsule.

Secretary of State Kim Wyman and members of the Keepers of the Capsule Board spoke to an audience of about 80 people.

“Another 25 years of Washington history is being added to the Time Capsule so that Washingtonians in the future can someday learn what mattered to us and how we lived,” Wyman told the gathering. “The fact that this ceremony takes place on George Washington‘s birthday only adds to this event. On the day when Americans celebrate the birthday of the father of our country, we also mark this day of dedication to the future of our great state.” 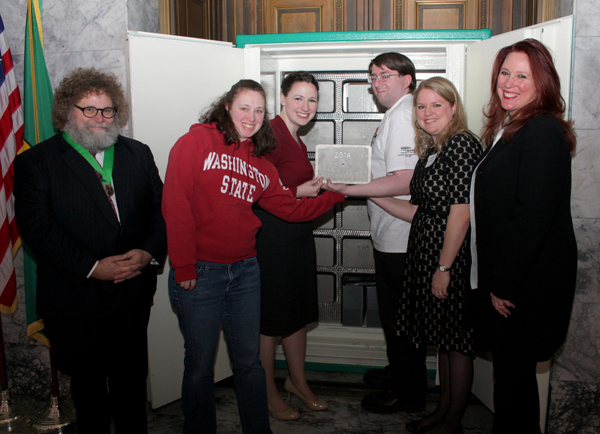 Secretary Wyman stands next to the Centennial Time Capsule with capsule organizer Knute Berger (left) and members of the 1989 Capsule Keepers.

The mini capsule placed inside the safe Sunday is the second of 16 that will be used to store artifacts of Washington state history. The first capsule was placed inside 25 years ago. The Centennial Time Capsule is a 3,000-pound green safe that holds all of the stainless steel mini time capsules.

All of the filled capsules are slated to be opened in November 2389, in honor of the state’s 500th birthday.

The contents of this time capsule include:

The Secretary of State’s role with the Time Capsule is to keep the list of names and contacts of all the Capsule Keepers and update it as needed.

To learn more about the Keepers of the Capsule and the Washington Centennial Time Capsule Project, visit the Capsule Keepers’ webpage here or visit their Facebook page at www.facebook.com/WACapsuleKeepers.