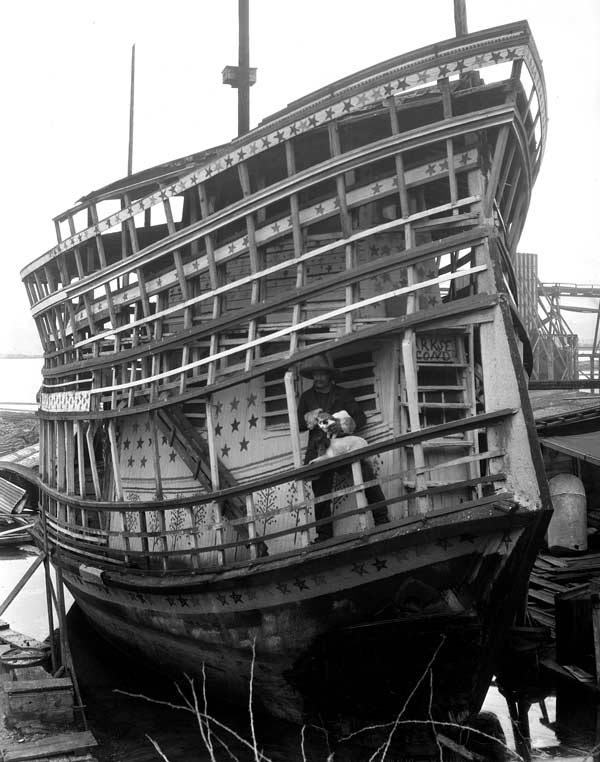 The first of our three July Archives Treasures is a collection of photos of an ark built by a man who feared a huge flood. Sound familiar?

Most Olympians are unaware that for more than 20 years, an ark sat in the West Bay, awaiting the high waters that one person thought would wash away humanity. “Captain” William Lound Greenwood (1866-1958) began his ark in 1920 atop the hull of an old schooner. Believing that a flood of epic proportions would arrive in 1932 as a result of severe earthquakes, Greenwood made the claim again in 1938 and 1941. (We don’t know if he looked anything like Steve Carrell.)

The Greenwood Ark resembled a Chinese junk but looked a bit top-heavy. It was 60 feet long with a 22-foot beam and topped with two decks that Greenwood built from scraps. The hull was decorated with red, blue and green stars. He hung painted signs from the ark with prophetic warnings, angels, and hymns.

The city of Olympia had continual issues with the ark, but after two decades, Greenwood was a local institution on the mudflats. In the summer months, he would happily entertain the curious who came to visit the Prophet of Mud Bay. Eventually, he relented and gave up his mission and moved inland. He sought to sell his ark for $300 or trade it for an old school bus. He eventually moved to Rochester, where he began work on a second, landlocked ark. Olympia’s city engineer burned the ark in 1942, ending a colorful chapter in Olympia’s eclectic waterfront.