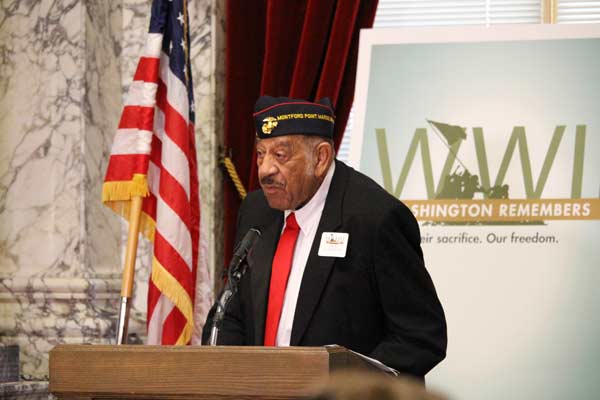 Marking the 70th anniversary of VJ Day that ended World War II, the Secretary of State has launched a new exhibit that features GIs in some of the most vicious fighting of the conflict, survivors of the Nazi death camps and minorities who encountered racism during the war. A dozen stories take visitors from the beaches of Normandy on D-Day to the awful winter of the Battle of the Bulge to postwar Japan and the aftermath of the atomic bomb.

“Washington Remembers: Their Sacrifice, Our Freedom,” is the vision of Kim Wyman, the Secretary of State. Wyman’s uncle, Cpl. John Dobbs, received a Bronze Star and a Purple Heart in the conflict.

“World War II united Americans in an unparalleled way,” Wyman said. “These stories give gripping detail and the lessons in them should find their way into every classroom and library.”

Deputy Secretary Greg Lane and historian John Hughes emceed a launch event in the Legislative Building’s State Reception Room, saluting the courage of the service members and civilians in sharing their painful experiences. Future generations need to know, and remember those stories, they said.

“It took decades for many veterans to speak openly about the war,” Wyman said earlier. “And we’re losing them every day. I’m delighted that we’ve documented, for history’s sake, the trials and victories in a war that changed who we are.”

Speakers included Clayton Pitre, one of the first African Americans to serve in the U.S. Marine Corps since the Revolution; John Robert LaViriere, a mortar gunner with the U.S. Army who detailed the life of a GI in letters he faithfully sent home; and Henry Freidman, a Jewish man from Poland who hid in a barn loft to avoid the Nazi death camps.

Seattle Mayor Ed Murray and his husband, Michael Shiosaki, attended to honor Michael’s father, Fred Shiosaki, and a throng of friends and family and history buffs joined the festivities. 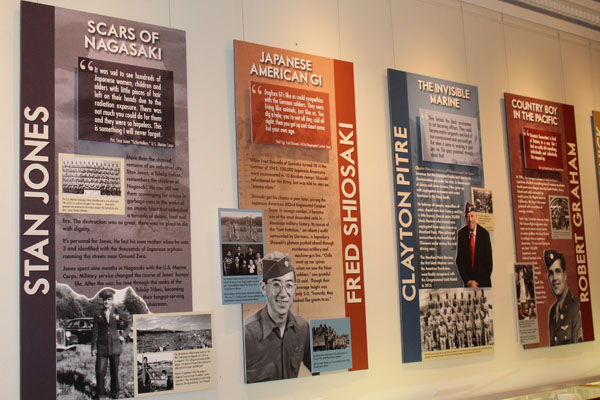 Some of the panels of the Washington Remembers exhibit.

The exhibit features the following 12 Washingtonians:

Les Amundson, a B-17 bomber pilot who spent 18 months in captivity after his plane was shot down over the Netherlands.

Henry Friedman, who, as a Jewish teen, evaded the Nazis for 18 months in small barn loft in Poland.

Robert Graham,  Washington’s former seven-term state auditor who was a flight engineer on cargo planes that few far across the Pacific during the war.

Bob Hart, an Army paratrooper who fought in Italy, France and the horrific Battle of the Bulge in Belgium. 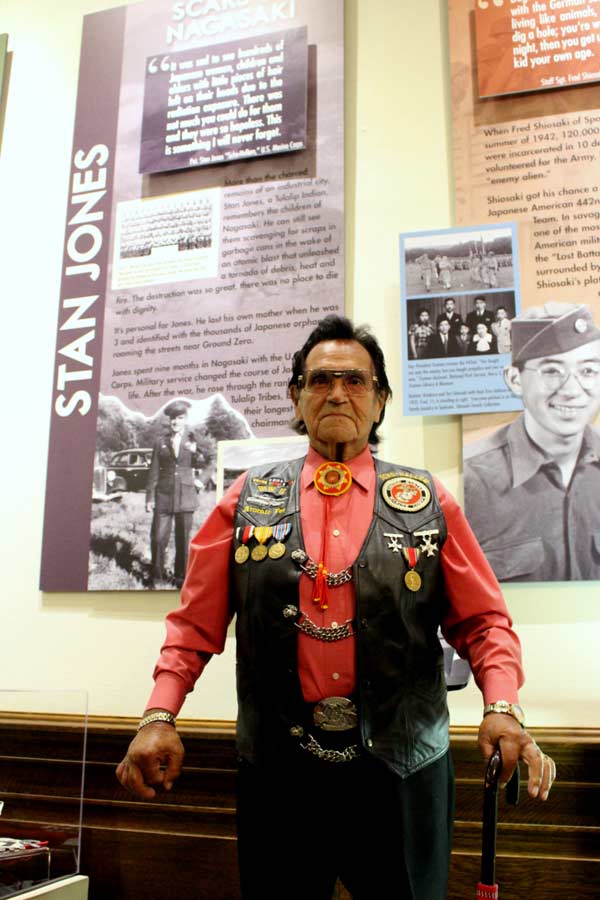 Marine veteran Stan Jones stands in front of the exhibit panel about him. (Photo courtesy of Benjamin Helle)

Stan Jones, a Tulalip tribal leader who, as a Marine, served in the South Pacific and later watched Japanese orphans scavenge trash cans for food after an atomic bomb destroyed much of Nagasaki.

John Robert LaRiviere, a mortar gunner in the U.S. Army who spent the winter of 1945 in a foxhole during the Battle of the Bulge.

Joe Moser, a fighter pilot who was shot down over France and later survived eight months of captivity and was released from Buchenwald concentration camp days before his rumored execution.

George Narozonick, a Navy sailor who was part of the massive D-Day invasion at Normandy in 1944.

Clayton Pitre, who trained at a segregated base during the war and landed at Okinawa in 1945 as one of the first African American Marines since the American Revolution.

Arnold Samuels, who escaped Germany with his family in 1937 only to return there as an Army Counter Intelligence Corps operative near the war’s end and helped liberate the Nazi concentration camp at Dachau.

Regina Tollfeldt, one of 15,000 women who worked in Boeing’s Seattle factories during the war. 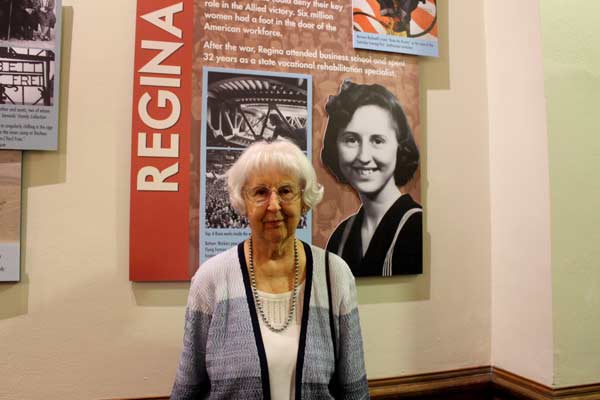