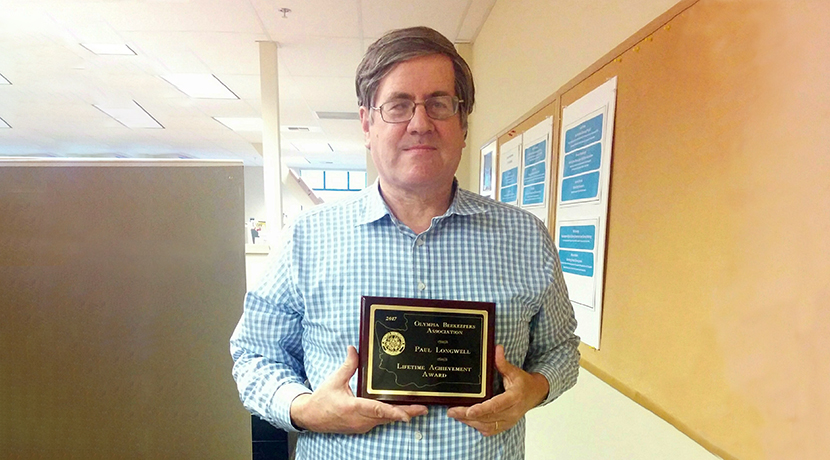 This week marks the end of an era at the State Library as we lose Paul Longwell to the happy world of retirement.

Paul has been on the IT staff of the State Library since 1989. Paul discussed the other day all the changes he has seen in his years on staff. The day he started, the Washington State Library had two servers with a total storage space of 10 MB, and two total IT staffers. The times have changed mightily.

The State Library had two main branches at that point: one on the Capitol Campus and another at the Library Planning Department in west Olympia, along with 13 branches in state-operated hospital and correctional institutions. No network connection linked them. The circulation system, housed at The Evergreen State College, used “dumb terminals” connected by a shared T-1 line. The State Library had no website or email. Perhaps most interestingly, the Office service used a word processor that saved each file in French, German, and English.

In the early 1990s, the Joel M. Pritchard Library building was rewired to connect staff computers to the file servers. The “dumb terminals” became Windows 3.1 staff workstations – a big upgrade!

The first agency email system was WordPerfect based, and it was exclusively for internal communication. The main library and our planning department were now connected with a T1 line. In state correctional facilities, our Institutional Library Services branches began to get computers but not network connections.

In the mid 1990’s, CD-ROMs entered the picture, and our IT staff figured out a way to move key digitized state resources Lasercat and Washington CD Law to a server for shared Legislative Network access. The ILS branches were still not network connected, but each had the CD-ROMs installed on its computers. Also, the first (very basic) Library website was built.

In 2000, mobile connections gave the remote branches access to email. Two years later, when the State Library was brought under the Office of the Secretary of State, the Library’s excellent IT department came to serve the entire agency, including the Washington State Digital Archives and the Washington Talking Book & Braille Library.

Today, the State Library maintains over 40 terabytes of storage — a 400 million percent increase of drivespace in 29 years!

We house an extensive digital collection, which includes historic newspapers, maps, photos, and full-text classics of Washington history. We collect and host all publications produced by Washington state agencies.

We wish Paul a fond farewell and a happy retirement. Thank you for helping advance our technology into the 21st century.