In early 2018, the Washington State Library launched a project to bring virtual reality (VR) to the state’s public libraries, in partnership with the University of Washington’s Information School (iSchool) and Oculus.

These pilot-phase libraries patiently helped the State Library figure out logistics, worked with UW researchers, and developed programs for their libraries using the VR headsets. 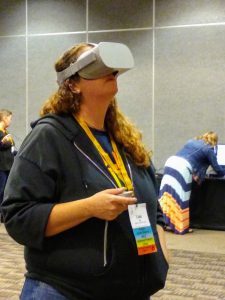 On the east side of the state, the Richland Public Library had already embarked on an independent exploration of VR and volunteered to participate in the iSchool research. At the Washington Library Association conference in October, several librarians who had been working in VR came together to share stories and experiences with the systems.

Johanna Talbot of the Richland Library offered a particularly touching account, which she shares here:

We have a college-aged patron who comes in nearly every day to study. She is a wheelchair user with minimal manual dexterity in her hands. She’d watched us do several of the VR demos previously and seemed interested, so I asked her if she wanted to try it. She was skeptical at first because of her dexterity, but I told her about the less interactive experiences (movies and tours) and promised that if she wanted to try something more interactive, I would manipulate the controllers to navigate for her.

The first thing she tried was The People’s House, a tour of the Obama White House. When she finished that one, she said, “I was sitting right next to Obama! I’m totally fangirl-ing right now!”

The next one we tried was not actually part of the pilot program, but which I’ve used a few times for folks who have great difficulty with the controllers: theBlu, produced by Wevr. It’s minimally interactive and consists of three underwater scenes in which ocean creatures swim over and around the user.

I launched the three scenes for her, and she was able to sit and enjoy the experience without further assistance. She kept whispering, “Oh, wow. Oh, wow.” After trying all three, she said to me, “For a few minutes there, I completely forgot that I was even in this wheelchair!” I almost started crying.

She immediately started brainstorming ways VR could be useful. She found the ocean sounds and movements of the creatures to be calming. She also became very excited about the potential therapeutic uses for VR as well as the ability to do things one wouldn’t normally be able to do. When I told her the researchers from UW would be visiting us in a few weeks to perform interviews, she made sure I put her on the schedule for interviews. She couldn’t wait to tell them what she thought.

My favorite part of every VR experience is seeing the childlike smile of joy and wonder every time a person experiences it for the first time. But this one was the best by far.

After she left, I went back to my desk. One of my coworkers took one look at me and said, “Oh no, what’s wrong?”

In phase two of the virtual reality project, the State Library will provide VR programming in more than 30 additional Washington libraries.