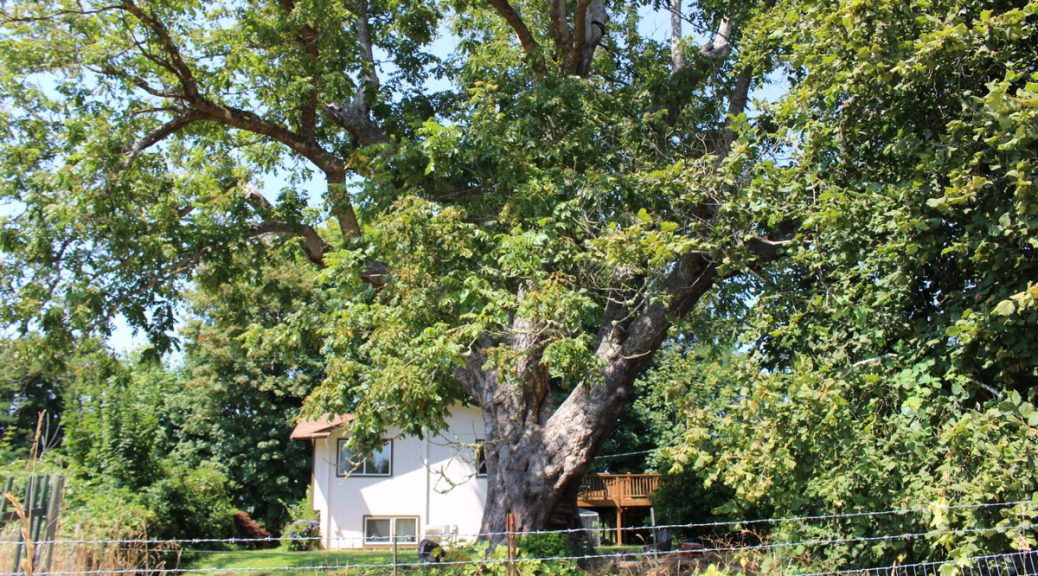 We have many historically significant trees in Washington, and many State Archives records document the people and events related to the state’s most historic trees. 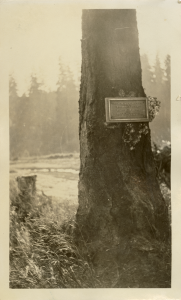 Archivist Jewell Dunn recently turned up one of the last photos of the Medicine Creek tree after it was topped by an arborist to be preserved.

The plaque seen in the Medicine Creek tree photo at right was dedicated by the Daughters of the American Revolution to commemorate the signing of the Treaty of Medicine Creek on December 24, 1854. Imagine the people who walked close to the tree.

The tree stood at Nisqually west of Interstate 5 until a 2007 winter storm felled it. Although I-5 was built to avoid the Medicine Creek tree, the fill material used for the freeway is thought to have affected the tree’s root system.

Today, a monument placed nearby in 1976 commemorates the tree’s significance. 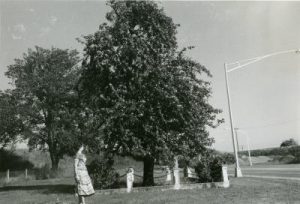 One of the oldest known planted fruit trees in Washington is the centerpiece of Vancouver’s Old Apple Tree Park.

This famous tree was documented as being planted by one of the early Hudson Bay employees in 1826, near historic Fort Vancouver.

Here’s a map of the city’s historic loop to show the tree’s current context.

Another tree which has (as of December 2018) withstood the Washington weather is the Bush butternut tree depicted in the header of this post. 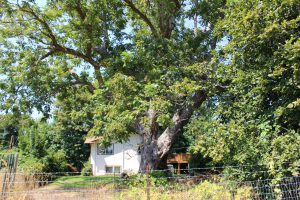 The tree was planted by early settler George Bush and is thought to be the oldest butternut tree in the West. This photo was taken by Archives’ Mary Hammer in August 2015, shortly before a wind storm damaged the mighty tree. Part of the tree had to be trimmed as a result of that damage, but the tree remains on Bush’s Tumwater farm site.

Another famous tree, or trunk, is the Stump house used as a post office near the Elwha River. Stump houses are made out of hollowed out tree trunks. Many were found throughout the Olympic Peninsula by the end of the 19th century, as you can read about here. 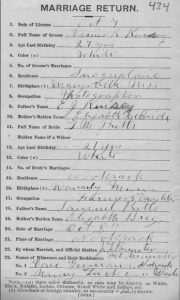 Darius Kinsey was a famous photographer in Washington from the late 1890s to the 1940s. He provided many photos of the stump houses and other logging related photos, and his marriage certificate can be found in Archives’ collection. At the time of his marriage he was living in Whatcom County.

Along with these historic trees, you can read about the well-tended collection of trees on the Capitol Campus in detail here.

Also, since 1972, seven Washington tree growers have been named National Grand Champion Christmas Tree Growers and had their trees used as the White House’s official Christmas tree for the Blue Room seven times. The most recent was in in 2004 from Rochester.

2 thoughts on “If Trees Could Talk: Famous Trees around Washington”