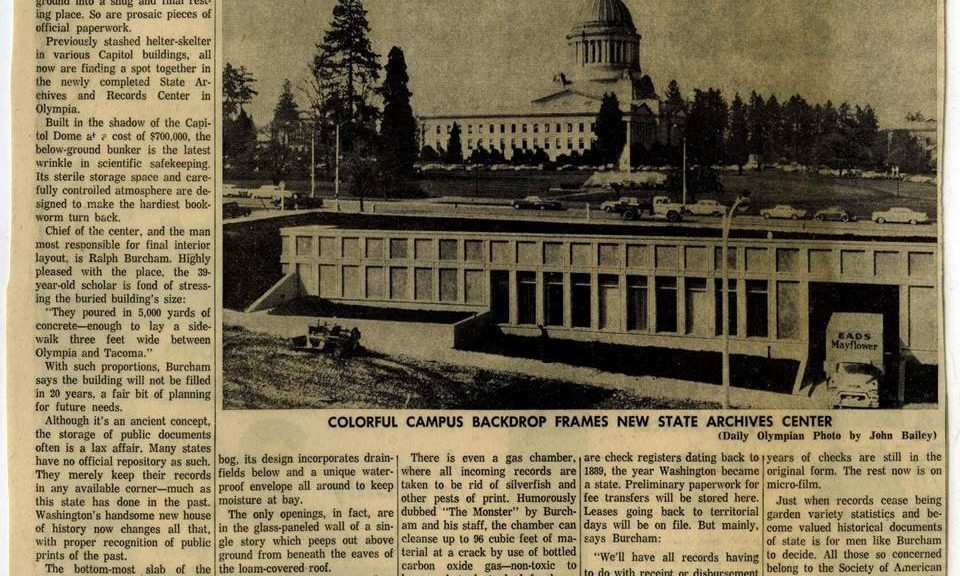 Over the years, April 25th has grown into a date circled on the calendar by our team at the Washington State Archives.

On April 25, 1963, the Olympia Archives Building opened up “in the shadow of the Capitol Dome,” ready to take records into what was seen at the time as a technologically-advanced facility.

That archives building started to show its age as the decades progressed. On April 25, 2014, the building amplified the need for a new, modern repository. The top floor flooded after hours, when nobody was around to notice and stop it. The deluge affected records on the floors below, and caused damage that will be preventable with a move to a new facility.

And on April 25, 2019, construction and funding of a new state library-archives building in Tumwater passed the Senate 41-7. After a minor amendment passed the House 92-6, the bill earned a trip to Governor Inslee’s desk.

The new building will not only offer modern facilities and more space to store and preserve records. It will also consolidate the Office of the Secretary of State’s operations in one location in Tumwater.

Design and planning costs are factored into the budget. Construction will be funded by a $2 recording fee added statewide to county clerk processing charges for documents such as marriage and birth certificates. The fee will be eliminated when the building is paid for.

Read more in this article published in The Olympian, Tacoma News Tribune, Bellingham Herald, and the Tri-City Herald.