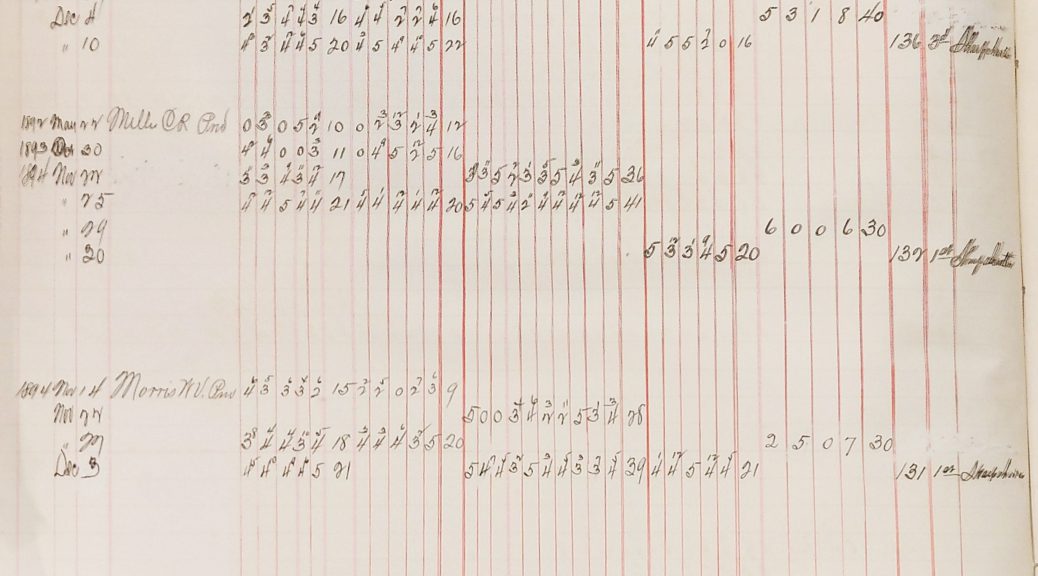 Volunteer archivist, Whitney Wyngaert, discovered a Columbia County Poll Book which contained information that had nothing at all to do with polling voters. Instead, the volume’s ragged, faded label reads “ Nat GR ’94.”

The headers printed on each set of pages claim the volume to be the “Registration Poll Book for Brooklyn Ward, City of Dayton, Columbia County., Wash., for the Year 1893.” The volume was transferred to the archives in 1990 from the Columbia County Auditor, and the fact that the volume was originally intended to be an Auditor record, and that it was maintained by the Auditor’s office for nearly a century speaks volumes about the close relationship between the community and the National Guard Company posted to protect it.

The record is, in fact, a Rifle Range Book, that details target practice dates and scores for Company F, 2nd Regiment, National Guard of Washington, and spans the period from September 1, 1891, through June 9, 1895.

Entries provide the date of the target practice; the name and rank of the soldier firing; their score at set distances of 200, 300, 500, and 600 yards; their total scores including complete misses of the target; their number of consecutive years at target practice; their ranking among the soldiers; and achievements such as “sharpshooter” or “marksman.” These achievements entitle soldiers to badges worn on their uniforms as well as prestige and other rewards. Each soldier’s shooting, from the company commander, Captain Johnathan Carr, to the Company Musician, H E Hamm, was recorded.

In the autumn of 1890, the state Adjutant General, R.G. O’Brien, and his assistant inspected the various companies of the Washington National Guard, starting with Companies C and G of the 1st Regiment of Infantry and Troop B, 1st Battalion of Cavalry in Tacoma, and working their way across the state, with the companies of the 2nd Regiment all being East of the Cascades.

In Dayton, O’Brien noted that a recent fire in the town had obliged Company F to move their weapons and equipment to the courthouse, and to assemble for weekly drills in the opera house. O’Brien found Company F to consist of 27 men present and accounted for, and the company’s weapons to be “in fair condition, all complete, with the exception of one gun with the breech lock blown out.”[i] One of the improvements suggested by the Adjutant General might well have been the creation and maintenance of the Range Book in question, and the arrangements for the storage of company equipment in the county courthouse might explain how the record came to be held by the Columbia County Auditor.

In May, 1898, these men, like the others serving in the various National Guard of Washington companies, became the nucleus for the First Washington Volunteer Infantry Regiment, and after less than a month of training at Camp Rogers, near Tacoma, the Volunteers were sent first to San Francisco, and then to the Philippine Islands. They returned home in November of 1899.

If it weren’t for an inventory being conducted by Ms. Wyngaert, this valuable, interesting glimpse into the early years of Washington’s National Guard might never have been discovered.

[i] Biennial Report of the Adjutant General of the State of Washington, by the United States Adjutant-General’s Office, O.C. White, State Printer, 1891.  Page 61.

One thought on “Company F at Dayton: Military History in an Unexpected Place.”