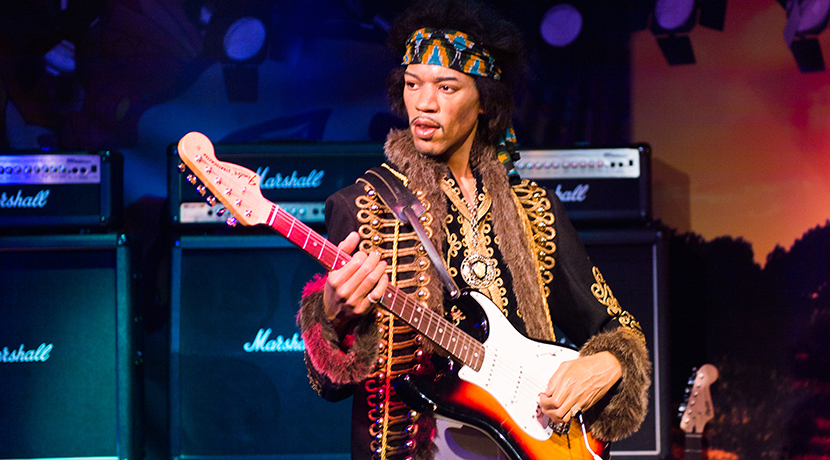 It’s hard to believe master guitarist Jimi Hendrix would have turned 77 this year. He has been gone almost twice as long as he was alive.

Just 27 years old when he died in 1970, his musical career — although short — has had one of the most lasting and profound effects on guitarists today. With the 50th anniversary of Woodstock just passed, we are again reminded of Jimi’s guitar style. His guitar sounds are quickly recognizable and argued to be some of the best of all time. His rendition of the Star Spangled Banner at the climax of Woodstock has been played for generations, and will continued to be played for generations to come.

Many people do not realize Jimi Hendrix’s maternal family have been in the Pacific Northwest for over 100 years. It was Preston M. Jeter, Jimi’s maternal grandfather, who moved west to Oregon in 1900. Preston worked as a day laborer for the railroad in southern Oregon and was counted in the 1900 U.S. Federal Census in Coos River, Coos County, Oregon.[1]

The young Preston Jeter found his way north to Washington where he married Clarice Lowson on May 20, 1914.[2] Their marriage certificate can be found on the Washington State Archives Digital Archives where a copy can be downloaded for free, or a certified copy can be purchased.

Several children were born to Preston and Clarice. One of their youngest was Lucille Jeter, Jimi’s mother. Lucille Jeter was married to Jimi’s father, James Allen “Al” Hendrix in 1942.[3]

Most of the Jeter family lived in Seattle. The King County tax assessor records captured photos of several houses where the Jeter family lived prior to the 1940s. Two of the houses were close to the Central District (313- 21st Ave and 318- 21st Ave) and another is in today’s Hillman City area (5512 39th Ave S).[4] These three homes were built between 1895 and 1906 with two still occupied today.

These are just a few of the records which are found in our archives across branches and formats. Often times our records are created for local county or local governmental use, but genealogists and family historians use them to tell a story.

One story which comes to mind is: “What if Jimi’s grandfather, Preston Jeter, never came west?” The Pacific Northwest might not have been able to claim one of the greatest guitarists ever.