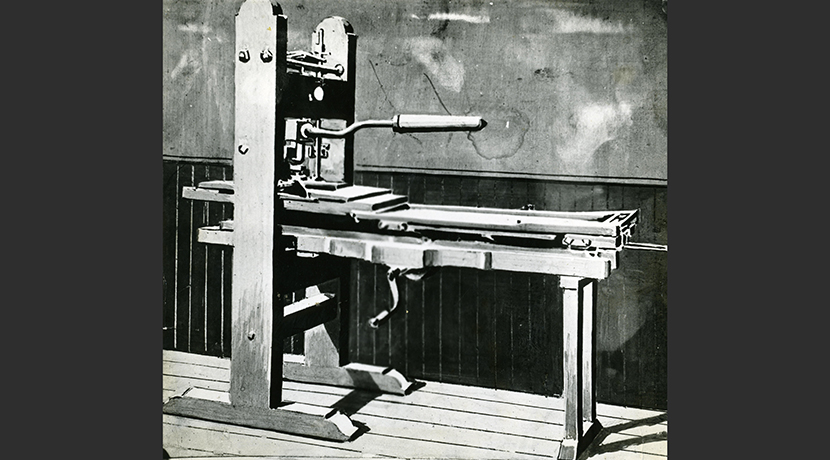 Thanks to past and ongoing digitization efforts at the Washington State Library, Washington Digital Newspapers hosts digital copies of some of the earliest newspapers published in Washington. Through their columns, early territorial editors provided a glimpse of some of the hardships faced by settlers in general, and by publishers in particular in the 1850s. This blog, one of a three part series, covers the arrival of newspaper publishers in Olympia and Steilacoom and the housing they found in these early settlements.

Newspapers published in the earliest years of European-American settlement in Washington confronted a number of obstacles, from the lack of reliable government administration, to difficult transportation, poor housing, and a shortage of readers to support them. Only a handful were published in Washington in the 1850s.

The Columbian, which changed names to the Washington Pioneer and then the Pioneer and Democrat, was first, published in Olympia September 11, 1852, five months before Washington was separated from Oregon to form its own territory.

There were several short-lived papers in Steilacoom, including the Truth Teller and Puget Sound Courier, before Charles Prosch founded the Puget Sound Herald there in 1858. This marked the end of the Pioneer and Democrat’s reign as the sole paper in Washington Territory, as other towns soon grew large enough to support their own, and even multiple papers.

The Columbian was published by James W. Wiley and Thornton Fleming McElroy in Olympia, the largest town in what would become Washington Territory at the time.

The population doubled by the time the territorial census was taken in 1853. Wiley later estimated that there were a total of 26 “houses, sheds and shanties” in Olympia when the Columbian was first published. It was a small number of readers to support a newspaper. On October 2, 1852, the Columbian reminded settlers that it needed everyone’s support to survive, suggesting that those who had subscriptions to multiple papers should cancel them all and instead purchase multiple copies of the Columbian.

Within their first two months, Wiley and McElroy discovered that the location of their office had been poorly chosen, as indeed had been about half the building sites in town. Olympia experienced large seasonal tidal fluctuations and the addition of fall precipitation swelled the waters of the lower Puget Sound so that the Columbian’s office flooded at high tide.

In November, Wiley and McElroy moved their office, announcing in the November 20, 1852 issue, “We are now comfortably located, entirely above high tide, and have no longer any use for a canoe to navigate around our ‘sanctum.’”

The founders of the Columbian were not the only ones with complaints about their original accommodations. In his later years, Charles Prosch recounted colorful, and perhaps exaggerated, tales of his early experiences in the territory.

At the 1892 Washington State Press Association meeting he told of his arrival in Steilacoom. This included his disappointment to discover that what he had originally taken for a well-established town emerging from the mist was actually about 20 shanties scattered between the enormous stumps of felled trees. His own accommodations were little better than a tent on a wooden platform, with rats scampering across the canvas ceiling and first campers, and then a skunk residing under the floorboards.

At least some of this account appears to have been hyperbolized. On March 4, 1859, after only a year in Washington, Prosch estimated that when he arrived Steilacoom had 60-70 buildings, though about half had been abandoned during the 1855-56 Indian War, and a population of only 100 settlers. He admitted that even he had been skeptical of the ability of such a town to support a paper.

Visit Washington Digital Newspapers to view these and many other historic Washington newspapers. Check back later to learn about problems early newspaper publishers faced in getting the basic supplies for living and printing.