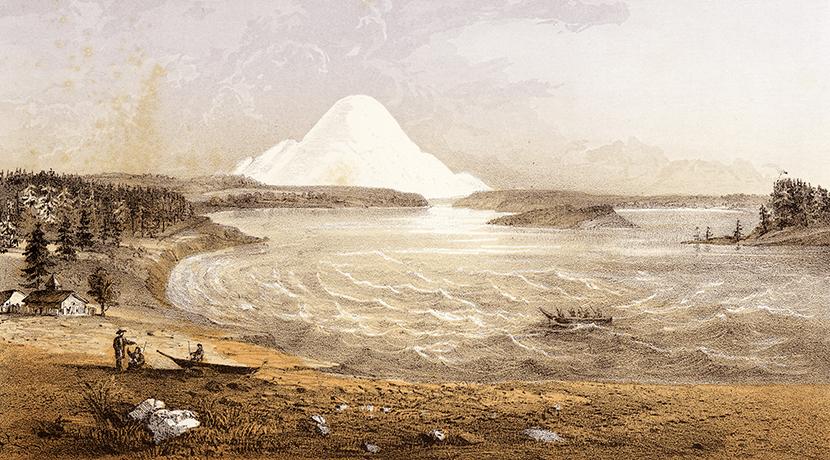 Thanks to past and ongoing digitization efforts at the Washington State Library, Washington Digital Newspapers hosts digital copies of some of the earliest newspapers published in Washington. Through their columns, early territorial editors provided a glimpse of some of the hardships faced by settlers in general, and by publishers in particular in the 1850s. This blog, one of a three part series, covers the challenges publishers confronted in obtaining supplies for themselves and their presses.

The September 16, 1854 issue of the Pioneer and Democrat noted that two years earlier, to immigrate to the Puget Sound required hiring a canoe for $100 and then driving any stock over a trail, a difficult trip that would often leave a family penniless. This was not the only route, as the editor must have known, because the press to start the paper’s predecessor, the Columbian, was shipped from Portland up the coast and through the Strait of Juan de Fuca to Olympia. However, travel by either method was still difficult, dangerous, and unreliable, and consequently supplies of all kinds were often scarce. Early Washington’s economy centered on timber rather than agriculture, so most of the food consumed, along with any other necessities, were imported to the territory on the same ships that carried lumber to distant markets.

This reliance on imported goods meant that early Washington settlers paid exorbitant prices for even basic necessities. The Columbian stated December 18, 1852 that flour was selling for $20 for 100 pounds, several times the price in other parts of the country. Three years later the Pioneer and Democrat rejoiced that the wheat crop in the territory was probably sufficient for the population, but in 1860 it once again was urging settlers to produce their own food since a collapse of the lumber market meant that all settlers were exporting in exchange for their necessities was cash.

In addition to food for the editors, newspapers depended on the same ships for their supplies. The Puget Sound Herald was forced to cease publication from March 2 to May 3, 1860 because it had not received either of the last two shipments of paper ordered. The ship carrying the first had sunk while the captain of the second had not filled the order. Prosch had been fortunate not to have had a similar break in publication shortly after starting the Herald. George Lee was originally co-proprietor of the paper, but left after less than two months. In the April 30, 1858 edition, Prosch notified readers of the dissolution and told how on Lee’s departure “the Old Press dissolved partnership also, and the lever rod, in pure despair, walked down upon the end of the wharf and jumped off.” Had some of the residents of Steilacoom not seen what happened and been able to help Prosch retrieve the missing piece, he might have had a long wait for a new one from San Francisco.

Even decades later, replacing printing tools could be painfully slow. The Port Townsend Weekly Argus, which had been printed on the press originally used by Prosch for the Herald, suspended for four months on October 31, 1872 after the people of Steilacoom bought the press back and publisher Alfred Pettygrove had to order a new one from San Francisco. In 1883, Frank Dallam was forced to print the first issues of the Spokane Falls Review on a borrowed press in Cheney when a piece of his press was lost in shipment.

Visit Washington Digital Newspapers (https://washingtondigitalnewspapers.org/) to view these and many other historic Washington newspapers. Check back later to learn about how the mail, or lack thereof, affected the newspapers the territory. See our previous post to learn about early newspaper publishers’ arrival in Olympia and Steilacoom.

Read part 1 in this 3 part series.