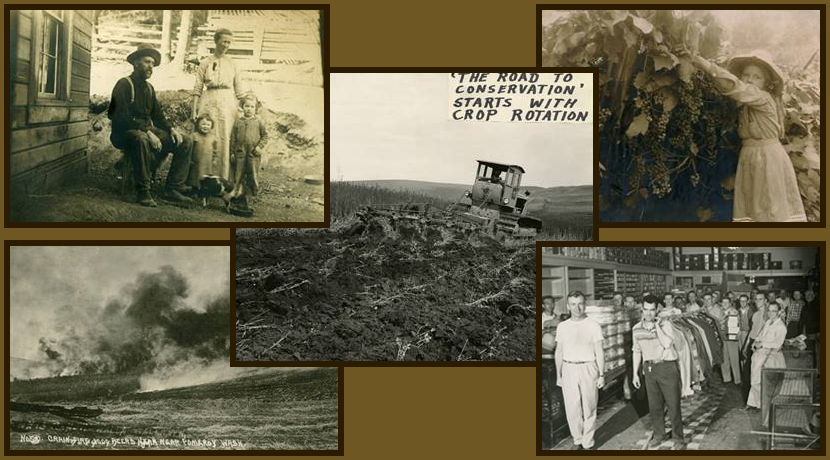 The Asotin County Library digitized a privately owned photograph collection of Rick Wasem, a descendant of two of the founding families of Clarkston. The Dustan family ran a farm and cannery that employed many people in the area. The Wasem family owned one of the early pharmacies in Clarkston, and it is still operating today.

The photos range from roughly the 1910s through the 1940s and give a lively feel for the culture and fashions of that period, depicting downtown Clarkston as well as leisure activities like backpacking, picnicking, and travel.

Click here to see the photographs digitized through this grant.

The Denny Ashby Library in Pomeroy has been digitally preserving Garfield County History since 2009. Most recently, the library focused on a trunk of letters, postcards, photos, and ephemera that once belonged to the Baldwin family of Southeast Washington. This material was contributed for digitization by Jennifer Ashby of Clarkston. Her great-grandfather, Zenas Baldwin, came to Garfield County in 1875 and was one of the area’s first settlers. His son Charles Baldwin served in the Washington State Legislature for several years in the 1920s; much of his family and social life is documented in this collection.

Click here to see the material digitized through this grant.

The Whitman County Library, based in Colfax, is a regional leader in local history preservation. With more than a decade of active work in the field, the library has amassed a large digital archive composed of material from a score of museums and cultural heritage organizations, and over 200 private family collections that otherwise would’ve been unavailable to the public.

The significance of this digitization work was recently brought to greater focus with the tragic September wildfires that devastated communities in Whitman County, including Malden and Pine City.

For its recent grant project, Whitman County Library continued to draw on its extensive network of community contacts to digitize and preserve at-risk collections. These include:

This year Ocean Shores celebrated its 50th anniversary of incorporation. The Ocean Shores Public Library assembled a team of volunteers to interview residents for a look back at the early days on the Point Brown Peninsula. One of the interviews was with former news reporter David Gadwa, who candidly and humorously spoke on a wide range of topics: the Catala shipwreck; local festivals and recreational activities; and the changing character of Ocean Shores from rural pastureland to tourist destination.

All of Ocean Shores Public Library’s oral histories can be found here.

Kalama is undergoing quite a bit of change with new business and industry. Over the last few years, the Kalama Public Library has spearheaded a local-history digitization program in partnership with the Port of Kalama, local historical societies, and even McMenamin’s Pub (which opened a new location in Kalama).

An interview with Ross LaRoy, a third-generation Kalama resident, describes his family’s work experiences in Kalama: working in shingle mills; making ice for the commercial fishing industry; and driving piles and working log booms on the Columbia River.

All of Kalama Public Library’s oral histories can be found here.

These are just a handful of the more than 5,200 photos and interviews available online at sos.wa.gov/library. Also available are historical maps, digitized images of over 150 years’ worth of newspapers, and much more. Additional digital resources on Washington’s history can be found at sos.wa.gov/legacy.

NOTE: All of these projects are made possible with funds provided by the federal Institute of Museum and Library Services, through the Library Services and Technology Act. For more information, contact the Washington State Library at (360) 704-5200 (Reception), (360) 704-5221 (Reference), or [email protected].

One thought on “WASHINGTON’S DIGITAL HERITAGE: AN AUDIO & VISUAL HISTORY”