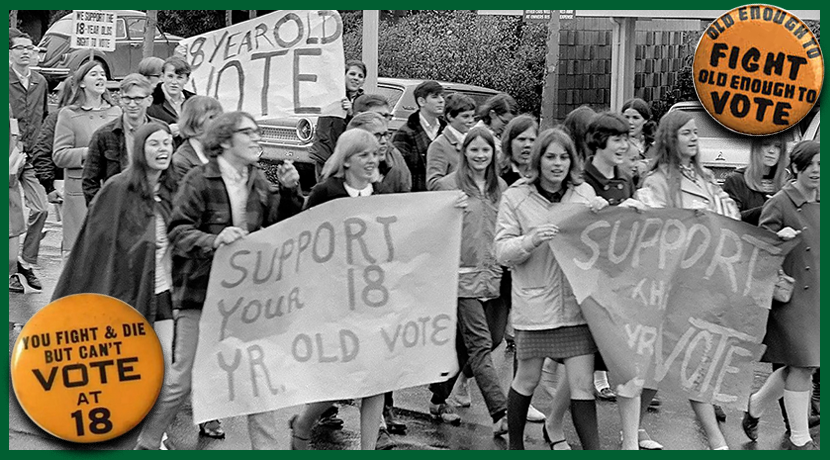 These were just a couple of the slogans from the movement to lower the voting age from 21 to 18, which ultimately led to the 26th Amendment of the U.S. Constitution, which states:

Tuesday, March 23, 2021, is the 26th Amendment’s 50th birthday, its golden anniversary. Though the amendment was passed a half-century ago, its roots go much deeper.

When the United States entered World War II on Dec. 7, 1941, President Franklin D. Roosevelt changed the draft age to 18. Soon the slogan “Old enough to fight, old enough to vote” and the movement to change the voting age were born.

In 1942 the effort gained momentum when U.S. Rep. Jennings Randolph (D-W.Va.) introduced legislation to lower the voting age. (Over the years he reintroduced this legislation 10 times.) In 1943, Georgia became the first state to change the voting age to 18 for its state and local elections; and President Dwight D. Eisenhower was the first president to publicly support prohibiting age-based denials of suffrage for those 18 and older.

The issue came to a boil during the Vietnam War when, in the face of another wartime draft, people questioned why they were old enough to fight and die for their country but too young to have a say in how it was governed. Others believed 18- to 20-year-olds lacked the maturity and responsibility that comes with participating in, or understanding, our democracy and exercising their right to vote.

Congress proposed amending the Voting Rights Act of 1965 to lower the voting age to 18 nationally in all federal, state, and local elections. Though President Richard Nixon believed the provision was unconstitutional — Congress had no power to enact it by simple statute — he signed it in 1970. Soon the amendment followed, and passed in 1971 — faster than any Constitutional amendment in U.S. history! Five states, including Washington, ratified the amendment the same day.

Washington, in fact, was already paving the way. In 1970 the state legislature sent a state constitutional amendment to voters to lower the voting age to 19. HJR 6 was narrowly defeated that November, however, following the Kent State uprising and the I-5 closure in Seattle due to student protests. Fortunately, “Vote-19” proponents had to wait only a year for their objective to become reality.

The 26th Amendment became part of the U.S. Constitution July 5, 1971, after it was ratified by three-fourths of the states. By October four additional states ratified the amendment. South Dakota followed in 2014. Seven states — Florida, Kentucky, Mississippi, Nevada, New Mexico, North Dakota, and Utah — have taken no action on the amendment.

Regardless, the “Right to Vote at Age 18” became the law of the land. As a result millions of 18-, 19-, and 20-year-olds were eligible to vote in the 1972 presidential election. In so doing they paved the way for future generations of young people to exercise their right to vote, make their voices heard, and shape the future of our nation.

In Washington state, new legislation was enacted in 2018 that allows 16- and 17-year-olds to sign up as future voters and be automatically registered to vote when they turn 18. In 2019 the Office of the Secretary of State launched the Future Voter program with educational materials, social media components, and other assets to encourage and empower the next generation of voters. Future Voter is an integral part of Temperance and Good Citizenship Day, which was enacted by the state legislature in 1923 to promote civic education.