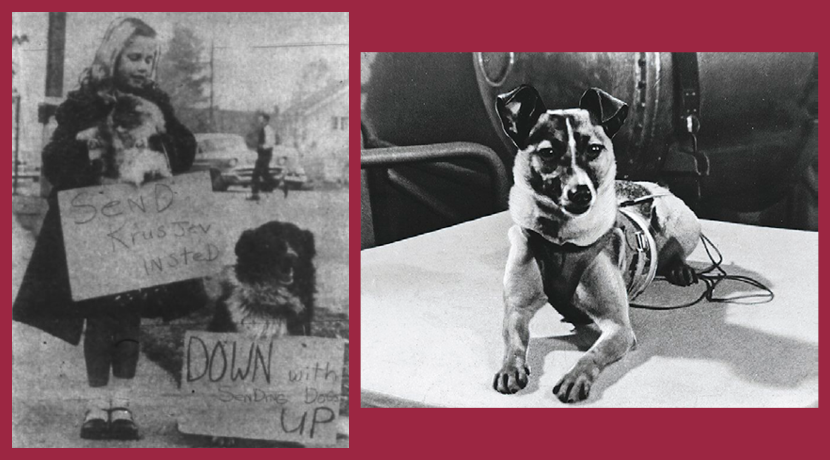 Librarians at Washington State Library are often found serving their customers at one of several microfilm machines, carefully searching among hundreds of Washington newspapers past and present for that elusive article or photo.

Sometimes a diligent search can reveal a serendipitous and very curious find, which can make a librarian’s entire day. For example, the front page of the Nov. 7, 1957, Bremerton Sun shows a young animal-rights activist named Mary Ann Olander (age 7 1/2) along with her dog, Laddie, and her cat, Queenie.

“They’re Picketing Sputnik!!” the caption reads. Mary Ann was reacting to the launch of Sputnik 2, which was fired into low Earth orbit four days before her picture was published in the Sun. Aboard the spacecraft was the first animal to orbit the planet, a Moscow street dog named Laika (“Barker” in Russian). Since there was no way to secure Laika’s safe return to Earth, Sputnik scientists planned to euthanize the dog with poisoned food. Conflicting reports out of the Soviet Union indicated that Laika died either from the poisoned food, asphyxia, or when the satellite’s batteries failed. (These scenarios were later revealed to be false.)

Mary Ann’s hand-drawn signs and her quote show that many people objected to the Sputnik launch for a reason that had nothing to do with the Space Race or the Cold War. Awareness of animal suffering during the Sputnik era helped pave the way for the first federal Humane Slaughter Act in 1958 and the Laboratory Animal Welfare Act of 1966, as well as humane societies and other organizations dedicated to fighting animal cruelty, many of which still operate today.

So whatever became of the animal-loving Mary Ann Olander? Research librarians tracked her marriage record through Washington State Archives – Digital Archives and discovered that she died at age 67 in California in 2017. Her obituary in the Visalia Times Delta states that she passed “surrounded by devoted friends, family and her loyal companion, Little Man.”

Clearly Mary Ann’s love of animals long outlived the fated Sputnik and stayed with her to the very end.