The Perils of Automatic Copyright Protection

April 26th, 2010 by Ahniwa Ferrari Posted in Articles, For Libraries, For the Public, Technology and Resources | 4 Comments » 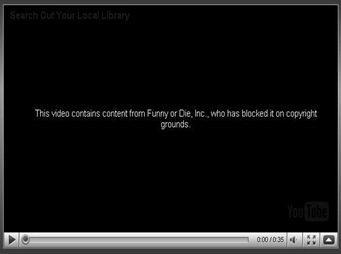 This story starts in Google Reader, where my pal Amy B shared this video by Jason H, and I thought, “Hey, that’s awesome, I wanna make one!”

GoogTube has a “Search Stories” video creator that made it easy, and I made my very own why libraries rock search story video last Friday and started embedding it all over the place for the world to admire my genius.

But they couldn’t. All anyone could see was a note that read: “This video contains content from Funny or Die, Inc., who has blocked it on copyright grounds.”

I was sad that my genius would go unrecognized, but even more, I was quizzical about how a video I made using one of YouTube’s own, self-promoting, video creator wizards, would become blocked, immediately, on copyright grounds.

I sent a complainy email, and received a fairly quick but unhelpful response that my video was “live and has not been removed by YouTube.” This is true, to an extent, my video lives and I, at least, can watch it. But no one else can.

My video is a mythological beast. A unicorn. I’ve seen it, touched it, ridden it, but as far as the rest of the world is concerned, I’m a kook and the thing doesn’t exist.

I sent a couple more emails (no response yet), and then did some of my own research. Funny or Die was founded in 2007 by Will Ferrell and others, and claims to make “really funny videos that feature your favorite comedians and celebrities.” Browsing through their offerings, I found that they too had created a Search Story, How Seth Green Hatched Robot Chicken.

And lo’, their video uses the same music that my video uses (provided as a choice through the video creation wizard), which is probably why my video got blocked, automatically, for violating copyright. Which is a shame because their video actually isn’t that funny, and doesn’t appear to feature any of my favorite comedians or celebrities, whereas my video is, as previously mentioned, a work of genius.

How did this happen?

YouTube’s automated Content Identification tool, that’s how. Here’s what they say about it:

The Content Identification tool is the latest way YouTube offers copyright holders to easily identify and manage their content on YouTube. The tool creates ID files which are then run against user uploads and, if a match occurs, the copyright holders policy preferences are then applied to that video. Rights owners can choose to block, track or monetize their content.

Basically, Google creates a “fingerprint” of any copyrighted materials, and then tries to match that against every video that users upload on YouTube. I don’t have a problem with that part, it makes perfect sense to me, but in this case Google got it very wrong, and there’s the potential for more problems exactly like this one in the future.

YouTube claims that it’s very easy to dispute these claims and get your video back up and running, but that doesn’t make this any less lame (and it’s not that easy). Now I’m a fairly tech savvy person, but it took me a couple hours just to figure out what was going on and that my video was, in fact, blocked. Because I could see it, I assumed everyone else could, and I sent out links and embedded it on all my social networks as my thinly veiled need for public approval demanded.

Even after you realize something is wrong, it’s still not easy to find the form. I got lost in legalese FAQs for awhile, and ended up submitted the wrong dispute form to the wrong section of YouTube (hence my not-so-helpful reply referenced above). Their response was quick, though not helpful, and I responded back immediately, and then waited the entire weekend without another word.

So I created a second, identical video, just to see if the first one was a fluke.

And it was blocked too.

Finally I found the right dispute form, and claimed my video does not, actually, contain any “third-party copyrighted material.” The official YouTube blog states that once I’ve filed my dispute, my video should immediately go back up on YouTube. If I view my dispute info, it claims the video is still “blocked worldwide” while awaiting a response from Funny or Die, Inc. (who probably couldn’t care less and doesn’t want this hassle any more than I do).

And it’s not just my genius that’s being slighted. If you listen to NPR, you may have heard this story on April 23rd’s All Things Considered about YouTube pulling down Hitler “Downfall” parodies. Parody falls into the realm of fair use, but automated systems aren’t known for their recognition of humor. These videos, like mine, are within the realm of copyright law, and if their creators take the time to dispute these copyright restrictions, will likely become viewable again unless the owner of the copyrighted material successfully sues to have them taken down.

Unfortunately, many of these video’s creators probably won’t dispute the claim, being unaware of their own rights, and it seems absurd that they should have to. This is all even a bigger shame because there could be an easy solution.

YouTube, instead of creating an opt-in mode of copyright dispute, should create an opt-out option. In other words, instead of banning videos automatically and then making their creators fight to get them reinstated, they should simply flag the videos and send the video creator an email. The email should contain a very simple, straight-forward form allowing the video creator to claim that they do not believe their content infringes on any copyrights; so long as the content creator responds within a week (2 weeks, a month?), their video remains up and it becomes the responsibility of the copyright-holder to determine if they want to pursue any further action.

It would be an easy fix that fits in with Google’s “Don’t be evil” motto, but I won’t hold my breath to see it implemented any time soon.

In the meantime, then, I encourage anyone who has had their YouTube video blocked due to copyright restrictions to determine if the blocking is just (if you’re not sure, ask a librarian), and if it’s not, DISPUTE it! Somewhat ironically, someone has created a YouTube video for just this purpose, citing ways that you can fairly use copyrighted materials, and giving a step-by-step for disputing copyright blocks on your videos. (It would, of course, be more ironic if this video in turn were blocked on copyright grounds.)

As for my genius video? I uploaded it to Viddler, which doesn’t particularly care if I’m a copyright criminal, and you can watch it below. Enjoy!

4/28 edit: Video should now work on YouTube as well.

4 Responses to “The Perils of Automatic Copyright Protection”