June 7th, 2012 by Matthew Roach Posted in Articles, Digital Collections, For the Public, Random News from the Newspapers on Microfilm Collection, State Library Collections, Technology and Resources | Comments Off on The Civil War’s Youngest Soldier

Random News from the Newspapers on Microfilm Collection: The Civil War’s Youngest Soldier

Although this article was found entirely at random, I do have some history with this case. So some of the information was already filed away at home, but I could’ve easily found it here at the Washington State Library if I wanted to invest some time researching.

The newspaper in Montesano, Washington known today as The Vidette has a long genealogy of titles going all the way back to 1883, when it was initially called the Chehalis Valley Vidette. In fact our subject, William Henry Bush, worked on the first issue at the printing press.

In the issue for Feb. 19, 1909, the paper ran an amusing headline article about a local character named William Henry Bush. It was reprinted from a piece that was originally published in the Tacoma Ledger:

He Replies in Detail to Federal Court Summons

“Sam D. Bridges, deputy clerk of the United States court, received something unique yesterday in the way of a return on a federal court juror summons sent out by the marshal’s office for the coming term of court. Summons from the marshal’s office are generally sent by mail and with each is inclosed a blank and generally a blue return envelope.”

“The return in question came from W.H. Bush, a well known Montesano man. The card, following the statement that it is the ‘United States court,’ etc., reads: ‘Jurors are requested to fill out the blanks below and return the inclosed blue envelope. No postage necessary.'”

“Here are the questions and Mr. Bush’s answers:”

Married or single–Married 24 years. Two children; male (over.) Oldest 20 years; sawyer in shingle mill. Youngest, 10 years; in school. Whole family dark complectioned; gray eyes. The blue envelope you inclosed was white. If it is necessary to have the card returned in a blue envelope you have to send it.”

“Clerk Bridges says he is having a special card made, one about seven feet long, which he purposes to send to Mr. Bush in order to put the family history on.–Tacoma Ledger.”

Using the Northwest card file finding aid (which we are in the process of converting to online), I discovered a biography of Mr. Bush existed in the book South-western Washington (1890). In this entry we learn he was born in Porter, Indiana in 1857. When he was about 10 his family moved to Fort Stevens, Oregon. Between 1869 and 1883 they lived in Pacific County, Washington until moving to Montesano in 1883. Soon after arrival William became the Postmaster, and was elected county Sheriff in 1886 and 1888. 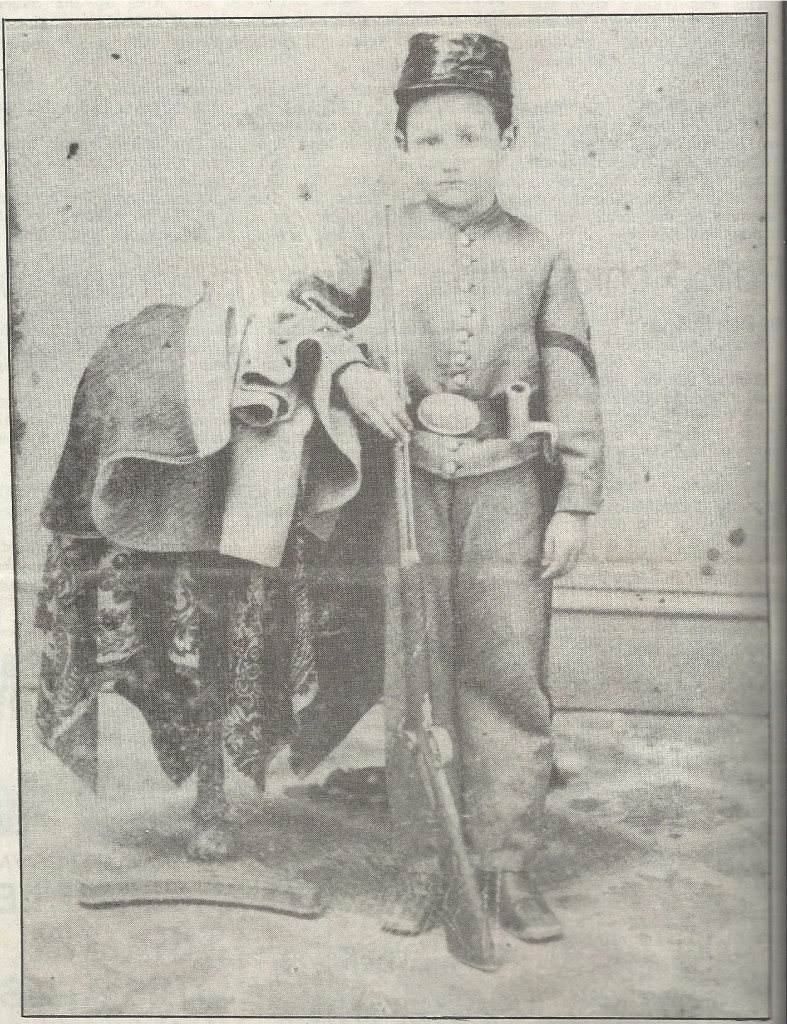 The first real clue we have in print to one of the most interesting chapters in the biography of Mr. Bush, something not
included in that juror’s form, is encountered after he died Oct. 28, 1938. The Montesano Vidette for October 27th mentioned local business establishments closed for an hour in honor of William Henry Bush, but also printed this interesting bit: “A treasured memory of Will Bush was of the time he talked with Abraham Lincoln during the dark days of the Civil War. It seems in that childhood encounter, that he caught something of the gentleness and nobility of character we associate with the name of Lincoln.”

Fast forward to 1997, and here is where my personal involvement kicks in. But just for the sake of showing other ways to follow this case, you can find the article “Plea leads Maine author to young Civil War veteran” by using WSL’s online index to the Olympian newspaper.

Jay S. Hoar, a University of Maine professor researching children in uniform during the Civil War, sent out a public plea for information on Willie Bush. He had tracked him to Montesano and then lost the trail. Those of us involved with the McCleary Museum were able to answer his question within a few days, thanks to using newspapers on microfilm.

While researching material for his book Callow, Brave and True, Hoar had run across the story of Willie Bush. At the age of five Willie served as a valet for his father, Asahel Bush, as he served in the 4th battery of Indiana Light Artillery. Although not officially enlisted, Willie was issued a uniform, which appears in a photo taken about 1863-1864. At some point in the War, Willie met President Lincoln.

At the time the Bush connection was made, Jay Hoar believed Willie was the youngest person to serve in the Civil War. But perhaps William Henry Bush was unaware of that when he filled out his card. Or maybe he didn’t have enough room on the form. The answer to who the youngest person to serve in the War seems to be a matter of debate, if one scans through Internet, but Willie is definitely among the youngest, if not the very youngest.