UNUSUAL BIRD IS MADE A PRISONER

November 20th, 2014 by Nono Burling Posted in For Libraries, For the Public, Random News from the Newspapers on Microfilm Collection, Uncategorized | Comments Off on UNUSUAL BIRD IS MADE A PRISONER 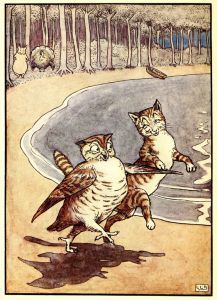 The jumblies and other nonsense verses” (1910)
http://bit.ly/1pNxtrZ

Edward Lear’s classic nonsense poem The Owl and Pussycat has such a charming conclusion:

And hand in hand, on the edge of the sand,

They danced by the light of the moon,

They danced by the light of the moon.

Well, er, that’s not exactly how this piece of Random News ends. It is an article that will mortify birders and make us cat lovers shake our heads sadly but knowingly. Our precious purring little pointy eared felines

dance at the thrill of the kill,

They dance at the thrill of the kill.

But I am giving away the ending. 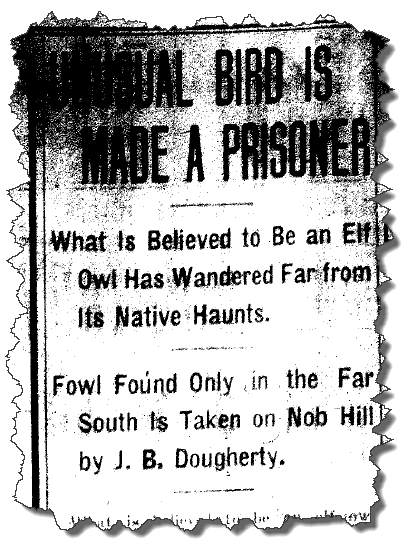 This installment of Random News comes from The Yakima Daily Republic, Jan. 15, 1910:

UNUSUAL BIRD IS MADE A PRISONER

What Is believed to Be an Elf Owl Has Wandered Far from its Native Haunts.

Fowl Found Only in the Far South Is Taken on Nob Hill by J.B. Dougherty.

What is believed to be an elf owl which naturalists say is seldom found further north than the border line of the United States, it rarely coming into California, has been captured in the Yakima valley. It was taken by J.B. Dougherty of Nob Hill Wednesday. The little bird offered no resistance, it appeared stunned by the cold weather.

The little owl sat on the fence in front of Mr. Dougherty’s residence. As he approached the small fowl it showed no signs of fright and allowed its captor to put his hand around it without apparently the least alarm.

Killed by the Cat.

The body of the bird is scarcely larger than that of a canary, although its feathers, projecting almost at right angles from its body, gives it the appearance of being much larger. On the scales it tips the beam at less than two ounces.

Mr. Harmer searched Dawson & Bowles’ Birds of Washington and was unable to find a description answering to this fowl. He went to the Color Key to North American Birds, a book known to the taxidermist as the bird dictionary. It is published by Frank M. Chapman and Chester A. Reed. There he found the elf owl, the description of which in every way answers to this unusual species.

The book says that the range of the bird is on the tablelands of Mexico, from Pueblo north to the Mexican border of the United States and in lower California, rarely in California. 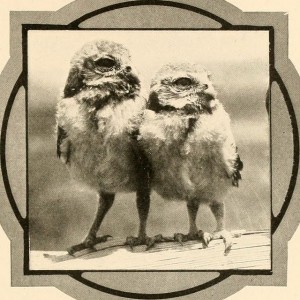 The birds of Washington : a complete, scientific and popular account of the 372 species of birds found in the state” (1909) http://bit.ly/1uYfqGp

Its appearance is like that of any other owl except that it is very small. On the back it is a grayish brown, the head is spotted and the back is barred with rust. The under parts are irregularly spotted with an ashy gray.

The bird dictionary says the elf owl utters a tremulous “cha-cha” in different keys, sometimes low and distinct. There is no other description given than that already referred to.

How this little species should have wandered so far from its native haunts is a wonder to all those who have seen it. Naturalists who have seen the little owl are even at a loss to give a theory as to how it ever became so far separated from its habitat.

The bird will be mounted on the profile of a half moon.

A modern work in the WSL collection, Elf owl : Micrathene whitneyi / Susanna G. Henry and Frederick R. Gehlbach (1999) confirms that the 1910 Yakima Elf Owl was indeed about 1000 miles outside its range. It is possible what Dougherty captured was in fact a Northern Pygmy Owl, which would be totally in range. However, the Pygmy Owl is included in Dawson and Bowles’ work and Harmer didn’t think his specimen in hand matched the description.

A viewing of that stuffed and mounted little owl would settle the issue, but the artifact has slipped away. Alfred Sterling Harmer, the taxidermist, had a variety of occupations. He was born in Ontario in 1879, became a United States citizen in 1901, and served overseas in the US Army during World War I. Harmer moved to Western Washington where he worked as an employee for Puget Power for 20 years. He died in Seattle, Nov. 12, 1951.

As for the fate of the feline, I guess the whole episode left a fowl taste in its mouth. 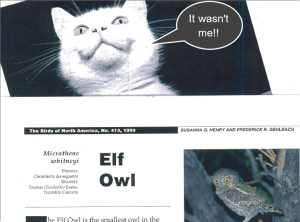 You can follow any responses to this entry through the RSS 2.0 feed. Both comments and pings are currently closed.