On the Eve of Prohibition…

April 6th, 2015 by Nono Burling Posted in Articles, For Libraries, For the Public, Random News from the Newspapers on Microfilm Collection | Comments Off on On the Eve of Prohibition…

After the voters of Washington State had approved a state-wide prohibition of alcohol in 1914, the clock started ticking for drinkers. The last legal drinks could be consumed on December 31, 1915. By that time, the town of Starbuck was the last town left in a two-county area that was still “wet.” The following article found at random in the January 8, 1916 issue of the Starbuck Standard describes the town’s transition into a Brave New World:

‘Mid Shrieks of Many Whistles Starbuck Sees a New Epoch

Starbuck, for the past five years the only wet town in either Columbia or Garfield counties is dry and for the first Saturday in over 25 years, liquid refreshments were not dispensed on New Years’ day.

Many had anticipated an unprecedented New Year eve for the old town, and but for a shortage of malt, vinous and spiritous liquors, this might have been fully realized. At any rate there was “something doing” from early in the day Friday until the numerous engines in the yards proclaimed the dawn of nineteen hundred sixteen. 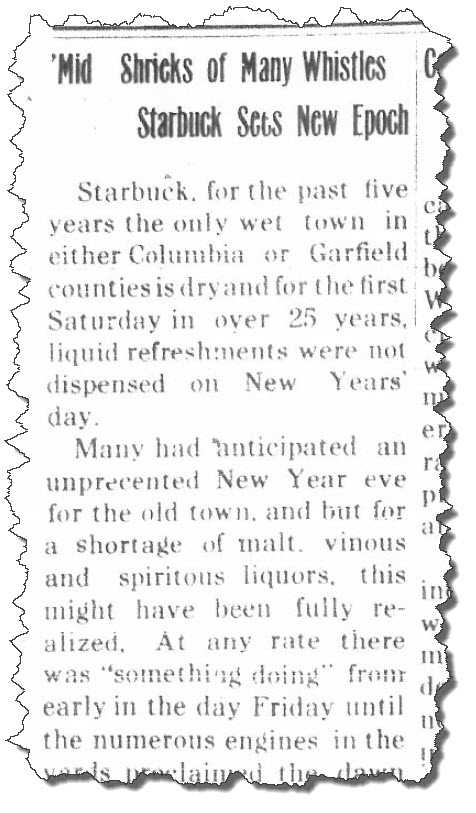 The Star Hotel bar, owned by J.S. Fuller, for 20 years in business in Starbuck, was the first to run out of goods and closed its doors at 3 o’clock in the afternoon. The Columbia Bar, J.R. Hill proprietor, held on until 8 in the evening when a shortage of goods compelled the closing of the doors. The Starbuck saloon, Mike Ray proprietor, seemed better supplied with stock and remained open until midnight, although during closing hours only whiskey was on sale. Mr. Ray has been in business here for nearly 15 years.

Saturday apparently was a blue day for many, and a quiet one for the town. Many of the imbibers, however, had laid in a supply of refreshments and this helped in making the world look a little brighter, for the moment at least. The stores were open during the forenoon, but in the afternoon the town took on a graveyard appearance.

The Star Hotel bar will be transferred into a pool and billiard room, where cigars, tobaccos and soft drinks will be sold, and will be open for business in about another week. It is probable that the Columbia bar will be utilized to a similar purpose, but as yet nothing definite has been announced. No announcements have been made regarding the old Starbuck bar, and it is reported that the building will not be placed in use for the present.

James S. Fuller (1860-1933) remained in Starbuck, running a “cigar store” until ca. 1923, when he moved to the Spokane area. Fuller died right before Prohibition was brought to an end. Toronto-born Mike Ray (1869-1943) also stayed in Starbuck for many years and worked as an employee of the railroad. James R. Hill (born ca. 1882) returned to his native Michigan and worked in auto mechanics and construction.

Originally a railroad junction, the Oregon Railroad and Navigation Company was a major economic concern in Starbuck in the early 20th century.

The Railway Carmen’s Journal, a labor union organ, mentioned all three of the above gentlemen in the April 1912 issue. Apparently there are a few inside jokes in this song:

Dedicated to the Strikebreakers of Starbuck, Washington.

Come all you scalies, if you want to hear

The story of the strikers here.

Recognition is the strikers’ aim,

On the Harriman lines she will win her fame.

Caller called the scalies at half past four

To calk the flues and look her o’er;

They found “Bad-Eye” York in the fire box door.

J.F. Killeen to the scalies said:

“Get Kid Yorke out or he will soon be dead.”

Then he gave them all the big glad hand,

Said, “I’ll write you transportation to the promised land.”

He weighed 200 pounds when he started the stunt.

Put on the overalls and cached his white front.

With Farry you can tarry just as long as you please,

In the bull pen with scalies, your crumbs, and your fleas.

With scab loving Beck he is onto his job,

Catering to the scalies and picking up the change,

Having no respect for his son’s good name.

Mike Ray stands in front of his bar,

Here’s where you can get your drinks and your smokes,

For this bunch of union men are nothing but jokes.

Having due respect for a union card.

When a scalie approaches him for a drink,

He points to his card and says, I don’t think.