June 15th, 2015 by Nono Burling Posted in Articles, For Libraries, For the Public, Random News from the Newspapers on Microfilm Collection, Uncategorized | Comments Off on Steve’s last post…

Although this article was found at random in the January 23, 1914 issue of The Mason County Journal, the story actually concerns a man from Spokane, and one of the great unsolved missing persons cases in Washington State history. The subject in question had a perfect name for a Pacific Northwest character– F. Lewis Clark: 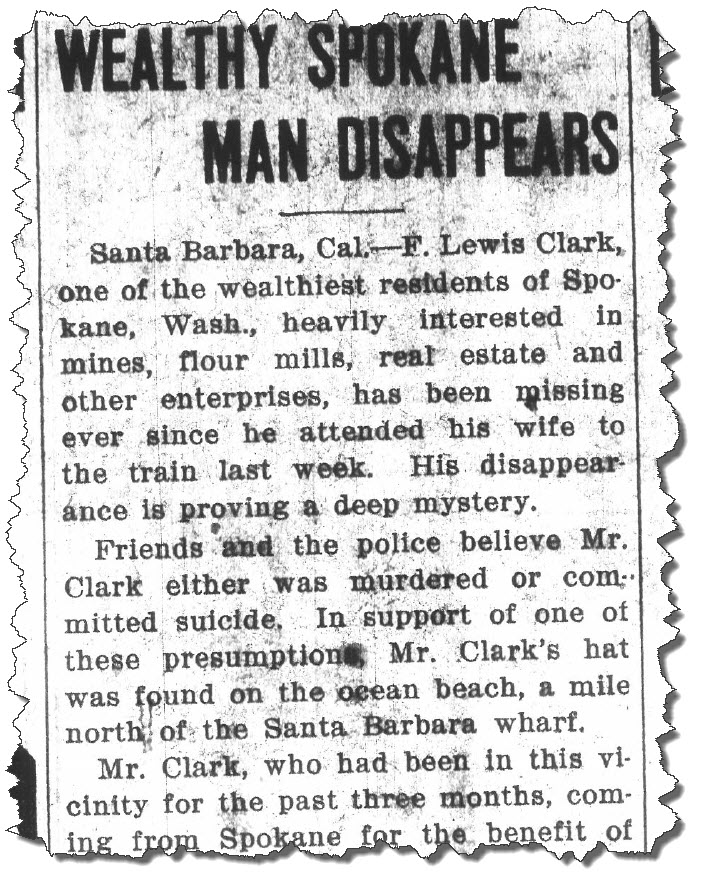 Santa Barbara, Cal.–F. Lewis Clark, one of the wealthiest residents of Spokane, Wash., heavily interested in mines, flour mills, real estate and other enterprises, has been missing ever since he attended his wife to the train last week. His disappearance is proving a deep mystery.

Friends and the police believe Mr. Clark either was murdered or committed suicide. In support of one of these presumptions, Mr. Clark’s hat was found on the ocean beach, a mile north of the Santa Barbara wharf.

Mr. Clark, who had been in this vicinity for the past three months, coming from Spokane for the benefit of his health, was staying at a hotel.

It is said that Mrs. Clark does not believe her husband is dead and will institute a vigorous search for him on the theory that he merely wandered away. When Mrs. Clark left Santa Barbara Friday night for Spokane she left her husband in his usual good spirits. Immediately thereafter he dismissed his chauffeur at the depot and he has not been seen since.

It was learned that the domestic life of the Clarks has not been entirely tranquil. Mr. Clark has been a sufferer for many years from a physical ailment.

Maine-native Francis Lewis Clark was 52 years old at the time he vanished. Starting in the 1880s he had established himself as one of the industrial giants of Spokane. He owned the largest flour mill in the Northwest. He was an executive with a railroad company. He was a yachtsman who was one of the founders of the America Cup race. He was a millionaire with two mansions: his main home in Spokane (by architect Kirtland Cutter) and his “summer home” on Hayden Lake, Idaho (called “Honeysuckle Lodge“), the latter of which was considered the most expensive home in Idaho when it was built in 1910.

At the time Clark vanished he left behind a wife, Winifred, and a son, Teddy, who was attending Harvard.

F. Lewis Clark’s disappearance has never been explained. Naturally many felt he had drowned himself, but Mrs. Clark initially suggested he had anonymously checked himself into a sanitarium. His valet told the press Mr. Clark was really in no physical shape to go anywhere unassisted. He was 135 pounds and believed to have been suffering from cancer.

The police dynamited the channel in hopes the blasts would dislodge his body, but to no effect. Some suggested that Clark faked his death.

The case grew murkier as police received a note from a purported group called the “Blackmailers” demanding $75,000 ransom for Clark. The kidnapping angle quickly fizzled. And ultimately the disappearance of F. Lewis Clark became one of the great missing persons mysteries in Pacific Northwest history.

Mrs. Clark had to sell off the estate by 1922 and died in 1940 under much more financially modest conditions. Both of the Clark mansions survive today as relics of an era of opulence. Just when I wondered why no one has dramatized this unsolved case, I discovered Northwest author Jamie Ford has used this mystery as a springboard for his latest story, Wish You Were Here at the Bottom of a Well.