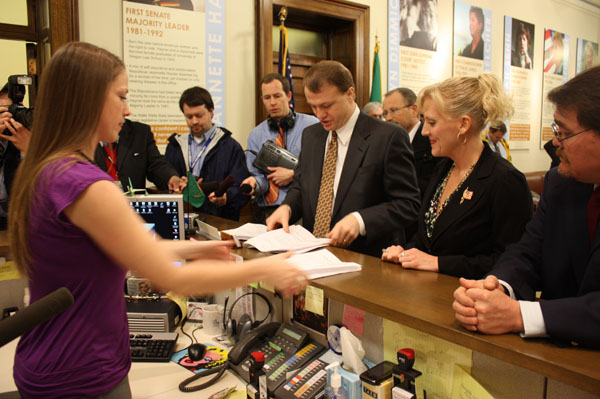 Groundhog Day might be February 2, but for Tim Eyman and our office’s Elections staff, it might as well be moved to January. In what is usually an annual event, the “I-Man” filed his latest initiative this morning in the Secretary of State’s Executive Office, flanked by several of his longtime supporters, plus Republican state Senators Pam Roach and Janea Holmquist.

Called the “Save The 2/3’s Vote For Tax Increases,” Eyman’s proposal could be dubbed “The Return of Initiative 960.” Presuming that the 2010 Legislature will suspend the supermajority requirement and raise revenue by simple majority in Olympia, Eyman’s initiative would restore for 2011 and beyond I-960’s requirement that the Legislature get two-thirds approval from both chambers or the state voters’ OK  to raise taxes . Under the Washington Constitution, the Legislature needs a two-thirds majority in each chamber to amend or repeal an initiative or referendum within two years after it’s been passed by the voters.

This year, initiatives to the people need valid signatures from 241,153 registered Washington voters to qualify for the November ballot. July 2 is the deadline to turn in initiative petitions this year.

For Eyman watchers, the most surprising part of the filing event was that the initiative king, who once wore a gorilla suit to promote one of his ballot measures years ago, went stylishly staid this morning, wearing a suit and tie.

I-960, which Eyman authored and 51.2 percent of Washington voters approved in 2007, made it tougher for the Legislature and guv to increase taxes and for state agencies to jack up fees. It imposed new approval requirements for tax increases and fee hikes imposed by state government, most notably that the Legislature needed a two-thirds vote in both chambers in order to approve tax increases.

Gregoire is expected to testify on her latest 2010 operating budget proposal during a work session of the Senate Ways and Means Committee Tuesday afternoon.

Eyman’s measure isn’t the only initiative filed with the Office of Secretary of State. Last week, two others were filed:  Philip Bitar of Everett brought in one that would impose a citizen-controlled ceiling on government income and debt. The other, offered by Karen Anderson of University Place, would require law enforcement to determine whether someone charged with a felony or DUI is a U.S. citizen. Neither has received an initiative number yet.

January 4 was the first day to file initiatives to the people.