It’s a bumper crop of initiatives apparently headed to the fall ballot.  On Friday, the deadline day for submitting petitions, three more campaigns brought in hundreds of thousands of signatures. 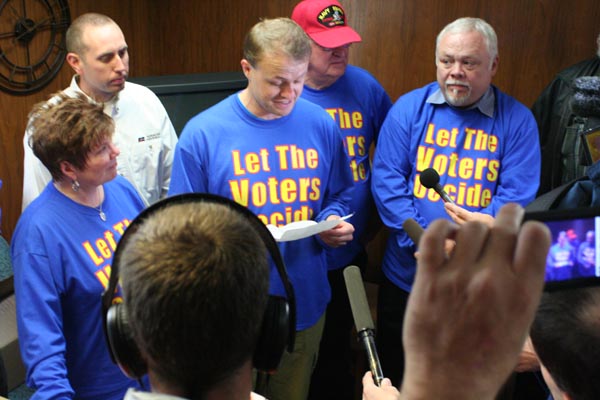 This brought to six the number of initiatives to the people for the year, tying the modern record set in 2000. The all-time record was the seven on the 1914 ballot, almost a century ago, the first year we could use the initiative and referendum process.

Sponsors of two anti-tax measures were first to come in Friday. Backers of I-1107, rolling back the new tax on pop, bottled water, candy and other items, brought in what they estimate at 395,000 signatures on more than 52,000 petitions.  They were collected in just three weeks and may have set a speed record.

Even before those were logged in, initiative activist Tim Eyman and backers of I-1053 submitted an estimated 330,000 sigs. Their measure would re-establish the two-thirds vote requirement for the state Legislature to raise taxes in Olympia.

The final turn-in was for I-1105, which would take the state out of the liquor retail business. Backers brought in what they estimated at 359,000 signatures.

All six initiatives qualify for 3 percent random sample checking, which will begin next Thursday at the Thurston County elections ballot-processing center in Tumwater.  The measures are expected to be checked in the order they were received.

Other petitions brought in previously deal with liquor privatization (I-1100), workers’ compensation (I-1082), and a high-wage earner income tax (I-1098). The latter campaign brought in an additional 26,000 signatures Friday afternoon, adding to their previous estimate of between 360,000 to 370,000.

Backers of I-1068, legalizing marijuana growing, sale, transport and use by adults, announced that they had not gathered enough signatures to qualify for the ballot this year, and would be back next year.

The bare minimum needed to qualify for the November ballot is 241,153 valid signatures of registered Washington voters (8 percent of the total vote for governor in 2008). The state Elections Division, though, has regularly urged all campaigns to submit at least 300,000 signatures, allowing use of random sampling, and providing a pad to cover duplicate or invalid signatures.

A footnote: The raft of initiatives will be joined by three measures placed on the ballot by the Legislative: Constitutional amendments dealing with bailable crimes (HJR4220) and adjusting the state debt limits (SJR8225) , and a referendum bill (R-52) on school retrofits.