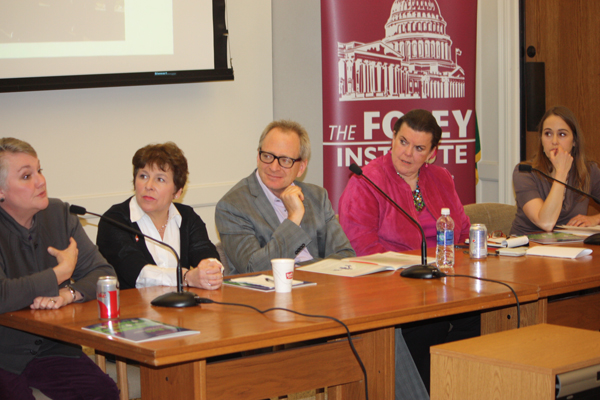 The accomplishments — and continuing challenge — of women in politics and government in Washington were subject of a Capitol forum sponsored by WSU’s Foley Institute and Secretary of State Kim Wyman.

Washington has been termed one of the best states for women to enter the political arena, and there is much to celebrate as the state marks the Centennial of the first wave of women taking political office, Wyman said in opening remarks.

Cornell Clayton, political scientist and head of the Foley Institute, introduced the forum and the significance of women candidates and officeholders to Washington’s public life.

“Through the years, we’ve made history — literally,” Wyman said, noting that for 12 years Washington had the highest percentage of women legislators in America. She also noted that for eight years, the top three posts — governor and the both U.S. Senate seats — were held by women.  Currently, the state Supreme Court has a female majority and a woman chief justice, and women are in positions of power in the executive, legislative and judicial branches, she noted.

But she and other panelists also noted some slippage — Wyman is currently the only woman statewide executive official and the Legislature’s percentage has dropped to 9th.

Richard Fox, political scientist and specialist in gender politics at Loyola Marymount University, offered some reasons for the challenge, based on extensive national research: Women show an “ambition gap,” not seeing themselves in public office and viewing the culture and politics as biased against women, as well as being a hostile process to run and to serve. Women are less likely to be encouraged to run, fear they don’t have electability and fundraising prowess, and have to juggle work and home life in ways men often do not, he said.

Lisa Brown, now chancellor of WSU Spokane and former Democratic Senate Majority Leader, and senior House Republican Rep. Maureen Walsh of Walla Walla, gave an insider’s view of life in politics.  Both said women make a difference in the political arena, both in policy and how it is achieved. They suggested women get involved in their local communities and with issues that are important to them.

Cathy Allen, a political strategist who specializes in working with women candidates, gave a rundown on strides women are making across the globe, including developing countries.  Some parties and countries are greatly improving their numbers by haves quotas of women-held seats, including filling of vacancies by women and minorities. She talked about the importance of recruiting and supporting women candidates.

Rachel La Corte, capital correspondent for the Associated Press and the first woman to head the press corps, moderated the event, an annual collaboration of the Office of Secretary of State and the Thomas S. Foley Institute for Public Policy and Public Service.