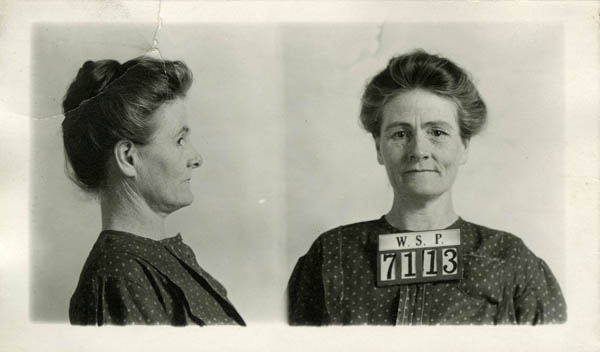 With Halloween here, the State Archives has just the thing to put a little scare into your step – a month-long exhibit at its Olympia headquarters about someone considered by many to be Washington’s first female serial killer.

Linda Burfield Hazzard was a controversial figure during the early 1900s. Bearing an osteopathy license and the title of “Fasting Specialist,” Hazzard wrote books and articles promoting the value of fasting to cure disease. Hundreds of followers, including socially and politically prominent Washingtonians, swore by her methods, extolling her virtues as an intelligent and gifted healer.

An exploration into her practice, however, reveals that an estimated 50 people died from starvation under her direct care, many of whom turned over inheritances, land, or power of attorney to Hazzard before their death. Tales are told of her Sanitarium in Olalla on the Kitsap Peninsula, where starving patients stumbled like human skeletons into town, begging for food or help.

Hazzard was convicted for the murder of only one patient, Claire Williamson, in 1912. She spent only two years in the State Penitentiary for the crime, and was subsequently pardoned by Gov. Lister under the directive that she move to New Zealand.

Hazzard’s story begs many intriguing questions:  Was she a con artist? Quack? Murderer? Or a feminist businesswoman, pioneering healer, and true believer? Using archival documents tracing Linda Hazzard’s life, this exhibit invites you to draw your own conclusions.

The exhibit will be on display through the end of November. The State Archives is located on the Capitol Campus at 1129 Washington St. SE in Olympia, just a block east of Capitol Way.

Special thanks to the expert librarians at the State Library for tracking down so many helpful newspaper articles on this subject.