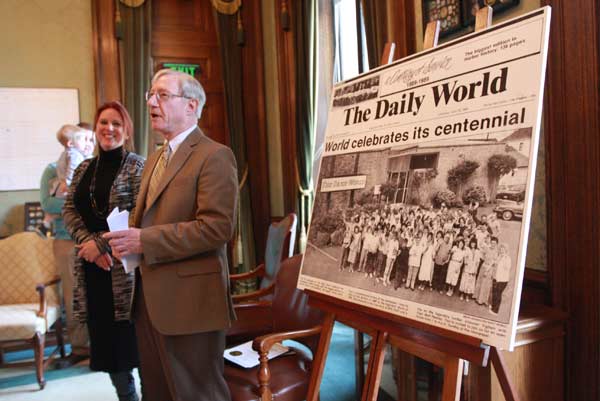 After being praised by Secretary Wyman (left), John C. Hughes addresses the crowd at a reception honoring him in Wyman’s office. (Photo courtesy of Laura Mott)

John C. Hughes was honored by the state Senate and Secretary of State Kim Wyman on Tuesday for his robust 50-year career in journalism and doing critically acclaimed oral history for Legacy Washington.

A large delegation from Grays Harbor and dignitaries, colleagues and friends from Olympia filled the ornate Senate gallery as Sens. Jim Hargrove, D-Hoquiam, and Brian Hatfield, D-Raymond, presented a resolution praising Hughes for his half-century of exceptional journalism at The Daily World in Aberdeen and his deft touch at writing profiles, oral histories and books.

Hughes, an Air Force veteran, “helped capture stories about people who may have otherwise been forgotten,” their resolution says, calling him “a treasure to his community and to his state.”

“Washington is fortunate to have John C. Hughes as a citizen and a story teller, as he loves the state dearly and is committed to carrying on his stories,” the resolution says. 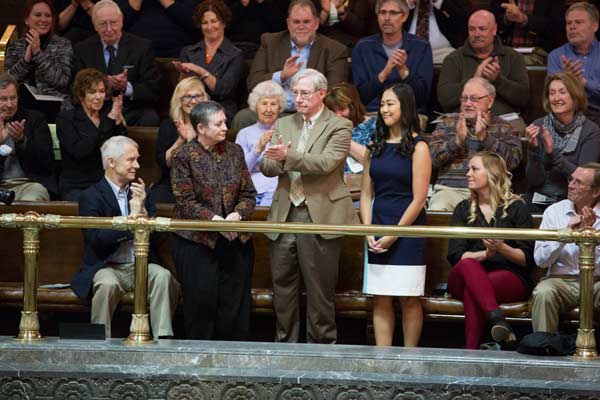 With his wife and daughter standing next to him, Hughes acknowledges applause from senators and others after the Senate passed a resolution honoring him. (Photo courtesy of Legislative Support Services Photography Department)

Hughes spent 42 years at the World, rising from paper carrier and copy boy to editor and publisher.  He then became chief historian for the state’s oral history program, which is housed in the Secretary of State’s Office.

Hughes’ latest projects are telling the stories of World War II veterans. It’s called Washington Remembers. Stories are online as they are finished.

After the Senate ceremony, the crowd feted Hughes at a reception in Wyman’s office.  Wyman called Hughes a legendary journalist who trained a whole generation of reporters and held to the highest standards. As chief historian, “he has a remarkable way of engaging people in the extraordinary elements of their own lives.”

Former Secretary Sam Reed called recruiting Hughes one of his best decisions, and a list of Harbor friends, including former House Majority Leader Lynn Kessler, D-Hoquiam, heaped on more praise. Hughes’ wife Patsy, daughter Claire and other relatives and friends attended. Spellman made a rare return visit to the Capitol for the Senate ceremony.

In his response, Hughes read a passage from “Tom Sawyer” about attending his own funeral.

“This feels like a combination of a wake, a bar mitzvah and a retirement,” he said with a chuckle. He added that he has no intention of retiring. “I want to do 10 more years.”