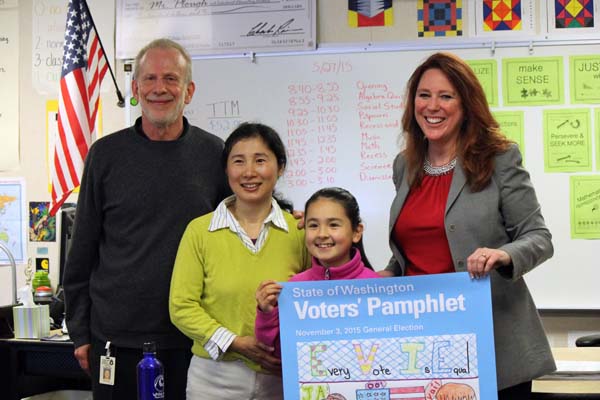 Emily Cain and Secretary Wyman (right) hold up a poster of Emily’s winning artwork in her class. With them (from left) are Emily’s teacher, Kevin Plough, and her mother, Amanda Cain. (Photo courtesy of Lindsay Pryor)

Emily Cain began Wednesday morning at Burien’s Cedarhurst Elementary School like she has many times before it. But what was a routine day for the fourth-grader took a major change around 9:30.

Her mom and her little brother unexpectedly entered her classroom. Then walked in a lady she’s never met, Secretary of State Kim Wyman. Standing before Emily, her teacher, Kevin Plough, and her classmates, the Secretary of State explained why she was there – to announce that Emily was the winner of the statewide Kids’ Art Contest.

“I could tell Emily had no idea why we were there, which made it really special when I told her she won the contest,” Wyman said. “It was fun to surprise Emily in front of her teacher and classmates with the big news! Congratulations to her and her family!”

Emily’s winning artwork, featured below, will be shown in the 3.2 million copies of the statewide General Election Voters’ Pamphlet that will be sent to Washington residents in October. Emily’s drawing and those of the runners-up will be displayed this fall in the Lieutenant Governor Brad Owen’s office in the state Capitol.

The annual contest, sponsored by our Elections Division, is for fourth- and fifth-grade Washington students.  Nearly 300 students took part this year. The contest prompts a discussion with our youngest citizens about the importance of voting. 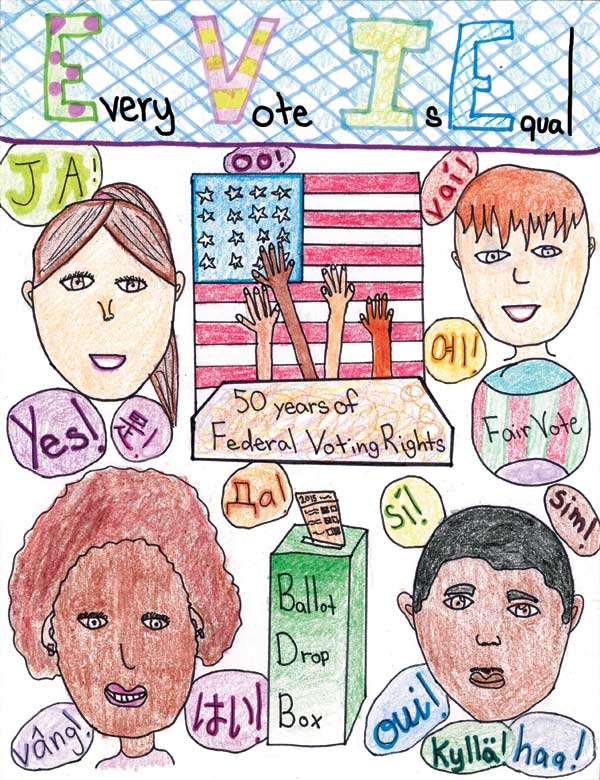 This year’s contest theme, “Every Vote is Equal!” celebrates 50 years of the Voting Rights Act, a landmark federal law that prohibits racial discrimination in voting. Civil rights activists Martin Luther King Jr. and Rosa Parks were on hand to watch President Lyndon B. Johnson sign the bill into law on August 6, 1965.

“Washingtonians and Americans today could not truly call themselves free if the Voting Rights Act didn’t exist,” Wyman said. “I hope the students who took part in this year’s Art Contest learned about this important law and how it’s helped give a voice to all citizens, regardless of skin color.”

The Kids’ Art Contest has been held since 2002. The Elections Division also conducts an educational Mock Election for grades K-12 each October.