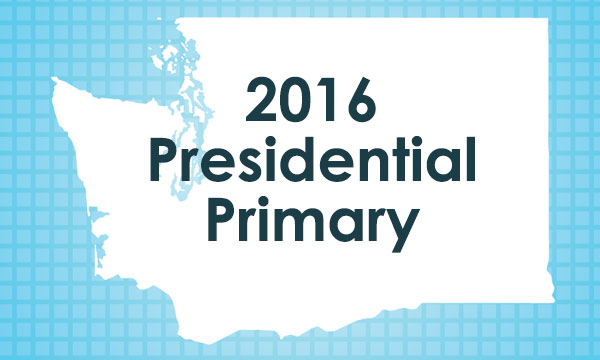 OLYMPIA – Secretary of State Kim Wyman is praising lawmakers for ensuring that Washington voters will have a voice in the 2016 presidential nominating process.

Lawmakers in both chambers and both parties joined in approving $11.5 million for the state to hold a Presidential Primary next winter. Wyman, the state’s chief elections officer, will advocate for a March 8 election, conducted by mail over an 18-day period. The Primary is a big opportunity to engage voters, she said:

“The voters win with a `people’s primary’ that is sure to gain the attention of the national campaigns and draw strong participation from our four million voters. The people of Washington will benefit by having candidates and the national media hear their issues first-hand.

“We have a wide-open race for the White House in 2016, with multiple candidates on both sides, and our voters will be eager to weigh in.”

Wyman will invite Democratic and Republican leaders to Olympia soon to select a date earlier than the current default date of May 24. She is suggesting March 8, one week after Super Tuesday. March 1 is the earliest that most states may hold primaries/caucuses without penalty.

The Legislature did not pass Wyman’s reform bill that would have made the second Tuesday in March the default date and would have required the parties to use the primary results to allocate at least some of their national convention delegates.   The Senate passed the bill, but the House did not.

However, House Appropriations Chairman Ross Hunter, D-Medina, attempted to set a threshold for 75 percent delegate allocation as a condition of holding the primary. Wyman supported that goal. That language was not in the final budget that passed Monday night, so the 2016 Presidential Primary will be run under the rules of the current system.

Wyman said she would have preferred that the reforms be passed, but the Presidential Primary still provides a big public benefit. “I see it as voter-empowerment and I want to do all we can to increase voter registration and participation,” she said

Primary participants will be able to select a Democratic or Republican ballot after they sign a party-affiliation declaration. This is the only kind of election in Washington where voters sign such a declaration; there is no party registration in the state.

Republicans lobbied for funding and for the reform bill and have said they will use the 2016 primary results. Historically, since the system was first used in 1992, the GOP has allocated half of their national delegates through the primary and half through the caucus/convention process. Democrats have not used the primary results and their state Central Committee recently voted to stick with the caucus process.

Wyman said the caucuses remain an important part of the state’s political life, but that they tend to attract party activists and not the broad swath of the electorate.

“When it comes to engaging the voters, it’s no contest,” she said. “Our primaries can attract 10 times as many voters as the caucuses.”

Primary ballots will come directly to the voter’s residence by mail and may be completed and returned over an 18-day window, noted state Elections Director Lori Augino. Military ballots go out 45 days before the election. She added:

“I continue to hope that both major parties will use the Presidential Primary. It is a super way to engage the voters.”