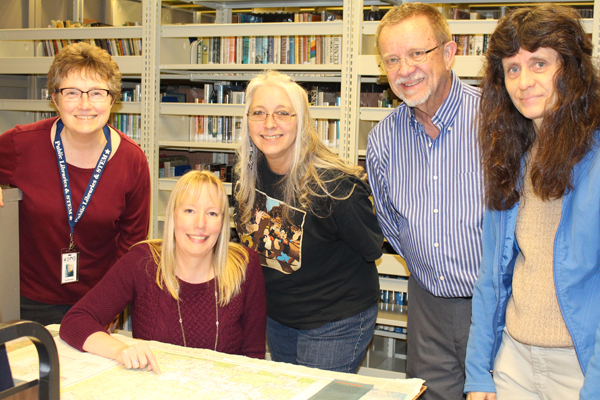 State Library staffers who oversee the federal collection look at one of the collection’s maps.

It’s no surprise that the Washington State Library houses many books, maps and other documents related to our state government and Washington in general. After all, it is the STATE Library.

What many don’t know is that it also keeps a vast collection of more than a million federal documents.

In fact, our State Library has been collecting federal publications since its beginning as a territorial library and later as a state library by participating in the U.S. Government Printing Office’s Federal Depository Library Program. The library was officially designated as the Regional Depository Library for Washington and Alaska in 1965. The collection includes printed reports, microfiche, CD-ROMS, DVDs and maps. The program also provides access to online publications and services via the Internet.

“We should get everything that GPO distributes and we are responsible for keeping that whole collection intact,” said Rand Simmons, who oversees the library’s federal collection project. “More and more, these documents are being published online rather than print, which offsets our need to find space for them.”

He works closely with Crystal Lentz, who administers the Regional Depository Library.

“One that has really captured me is called the National Individual Tree Species Atlas,” Simmons said. “It’s an oversized book produced by the Forest Service and it’s filled with magnificent photos. It has stories about so many tree species, and it talks about its value in nature and the animals that depend on it, all kinds of things. I think it’s a $90 book, but people can come here and use it for free.” Simmons said the tree atlas also is available online through the State Library’s catalog.

Simmons pointed out the federal collection even includes documents about the federal government’s investigation of allegations regarding the assassination of Martin Luther King Jr.

Another part of the collection that the public would find interesting is World War II-era docs from the Department of War. “It’s a treasure trove for people to glean information about World War II,” Simmons said.

Simmons has been identifying a small number of books in the collection about the relocation of Japanese Americans to internment camps during WWII.

“There have been a number of books published in the past decade about the internment camps during the war, so it’s interesting that our federal collection has documents related to the camps.”

Simmons said he’s working on a plan that makes more of the State Library’s federal collection available online, which he admits will be a major undertaking. He said he is identifying items in the federal collection that are of interest to the public and possible candidates for digitization, like the WWII documents and publications relating to ecology, and fish and wildlife.

Finding enough space for the federal collection in the current State Library building is a challenge, Simmons acknowledged. He said there are talks to allow some federal documents – for instance, having agriculture-related documents be housed at Washington State University’s library – in the future.

The University of Washington’s library also has a federal collection close to the size of the State Library collection.

The State Library’s federal collection is kept in a closed area, but Simmons says if people want to view any of the collection but don’t know what they’re looking for, they can go on the library’s website and search federal publications in the library’s catalog. If they know what they’re looking for, they can contact the library ahead of time so a staffer can retrieve that document or they can also place a hold on the document in the catalog. Some federal collection items can be circulated, while others can’t due to the item’s age, condition or value.

Simmons said it’s also possible for patrons to borrow one of the federal collection items through their local library thanks to the interlibrary loan system.

“We can loan a document to a local library, or if it’s only a few pages, we can scan those pages and send them to whoever is requesting them,” Simmons explained.

“These documents are available for people to use, so we encourage the public to learn more about our federal collection and find out what’s in there that they’d like to discover and see themselves.”

The State Library is joining the U.S. Government Publishing Office in February in spotlighting the services and resources available to the public at federal depository libraries throughout the nation.

Simmons can be reached at [email protected]