Washington Secretary of State Sam Reed and Governor Chris Gregoire have made it official, certifying that voters turned down Tim Eyman’s latest ballot measure, but adopted the “everything but marriage” domestic partnership law approved by the Legislature last spring. 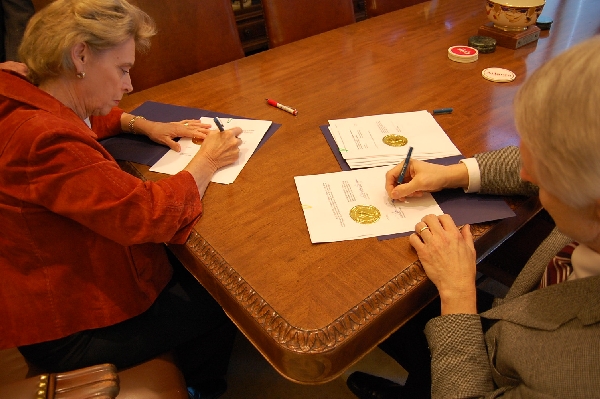 Referendum 71, placed on the ballot by foes of same-sex marriage, was approved by a margin of more than 110,000 votes, or more than 6 percentage points. National media describe it as the country’s first voter-approved domestic partnership or “everything-but-marriage” law.

The new law  had been on hold pending the public vote, and will now go into effect at 12:01 a.m. Thursday, 30 days after the Nov. 3 General Election.  The law is Senate Bill 5688 and applies to state-registered domestic partners, both same-sex couples and opposite-sex couples where at least one partner is 62 or older.

According to the canvass of returns certified by Secretary Reed and later proclaimed by Governor Gregoire,  R-71 had 951,822 votes to approve the law and 838,842 to repeal.

The other statewide ballot measure, Initiative 1033, was declared defeated, 1,003,943 to 729,918.  The margin of defeat was nearly 16 percent. Eyman’s measure would have capped state, county and city general fund revenue and used excess revenue for property tax relief.

Reed also certified the returns for three special state House races in Eastern Washington to fill the final year of unexpired terms. Winners, all Republicans, were Susan Fagan in the 9th District, David Taylor in the 15th and Terry Nealey in the 16th.  Taylor served last session as an appointee. Nealey defeated the Democratic appointee, and Fagan won an open seat.

Counties certified their returns last week, and in some cases, the winners already have been sworn in to fill unexpired terms, such as King County Executive Dow Constantine.  The voter turnout statewide was nearly 51 percent, with 1,823,364 ballots tallied.