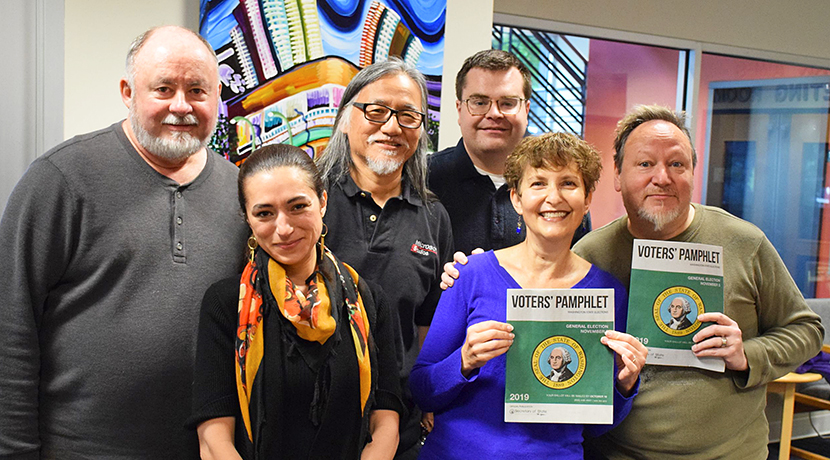 In preparation for the General Election on November 5, the Audio Book Production Department at Washington Talking Book & Braille Library (WTBBL) recorded the statewide voters’ pamphlet. Every voter deserves the right to learn more about the candidates and issues before Washingtonians this election, and for those who can’t read the print edition of the voters’ pamphlet, the audio version makes it possible. Narrators Rachel Glass and Gregg Porter spent over 53 hours recording the text, and editing required an… 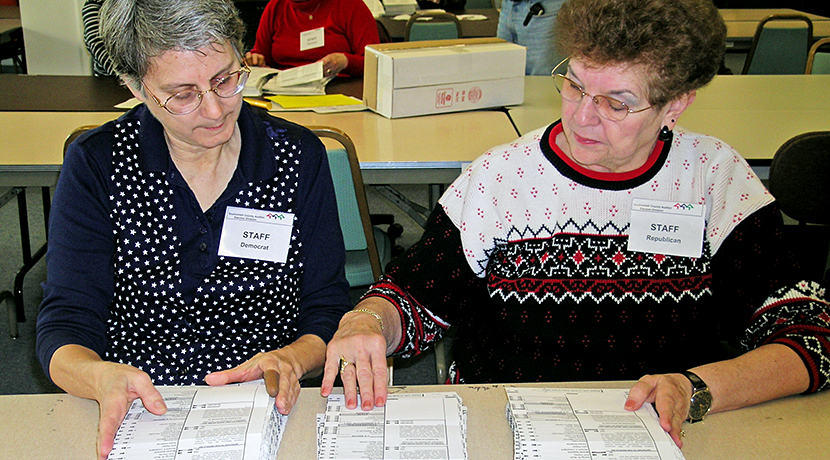 As 2018’s closely-watched General Election draws near, it may prove useful to read up about how recounts help ensure fair and secure elections for Washington’s candidates and voters. Nearly a decade ago in this space, we were prompted by a handful of very close election outcomes to summarize the basics of the process, which is also described on our Elections page here. Under state law RCW 29A.64.021, recounts are required in elections in which an apparent winner’s margin of victory…

With the U.S. Senate and many, many great primaries shaping up, you certainly don’t want to be left out.  For qualified Washington residents, Monday is the standard deadline to get signed up by handy-dandy online registration or by traditional paper application, or to update your address or name change. The primary is August 17, but most of us will be voting by mail. Ballots will be going in the mail by July 30. There is a late registration deadline for…

Washington Secretary of State Sam Reed and Governor Chris Gregoire have made it official, certifying that voters turned down Tim Eyman’s latest ballot measure, but adopted the “everything but marriage” domestic partnership law approved by the Legislature last spring. Referendum 71, placed on the ballot by foes of same-sex marriage, was approved by a margin of more than 110,000 votes, or more than 6 percentage points. National media describe it as the country’s first voter-approved domestic partnership or “everything-but-marriage” law….

As forecast by Secretary Reed, about 51 percent of the state’s 3.6 million registered voters cast ballots in this month’s general election. That’s about average for an off-year election with few statewide contests.  Falloff from last year’s record 85 percent turnout for the presidential-gubernatorial election was expected.  Wider use of vote-by-mail, including King County this year, two much-debated statewide ballot measures, and assorted local races did keep the turnout in the more-than-50 percent range. The 39 counties submitted their final…

Gov. Chris Gregoire, backed by House Majority Leader Lynn Kessler, is urging lawmakers to assist counties in producing a faster count of election returns. That could mean requiring that ballots be in hand by the local elections office by Election Day in order to be counted. Secretary of State Sam Reed has made that suggestion for the past two years, but the  legislation has generated little interest in Olympia.  On Monday, as the state’s largest city, Seattle, still awaits a…

Based on preliminary numbers from Washington’s 39 county elections offices, it looks like about 99 percent of  us voted by mail in the November election.  That’s about as close as you can get to all vote-by-mail as long as Pierce County continues to allow poll-site voting. Under Washington law, the shift from poll-site voting has been swift. First, voters were allowed to sign up for no-excuse “permanent absentee” status, meaning they were automatically sent ballots every election. Tons of people…

The continuing court battle by foes of Referendum 71 to shield their petitions from public view stepped up a notch Friday with filing of papers formally outlining the reasons why they want the U.S. Supreme Court to hear their case and uphold a disclosure ban. A 30-second recap: In September, U.S. District Court Judge Benjamin Settle in Tacoma agreed to Protect Marriage Washington’s request to block the Secretary of State from the scheduled release of over 9,000 R-71  petition sheets…

Media outlets have declared Referendum 71 approved by voters, describing it as the country’s first voter-ratified gay-rights measure.   As of Friday afternoon, the measure had an approval margin of nearly 71,000, or about 5 percentage points –754,180 to 683,320.  King County, which accounts for nearly a third of the electorate, was giving the measure an approval margin of over 150,000. King’s approval rate has been running 68 percent, and a number of the ballots remaining to be counted are from that county….

Fresh numbers from the Washington Elections Division show the number of younger voters dropping as a percentage of the electorate – and their elders, 55 and older, growing as a bloc. The state has nearly 3.6 million registered voters.  The closely watched youngest voters have traditionally the lowest voter turnout rate of all segments of the population – a perplexing reality that keeps election outreach workers searching for ways to connect.  The new figures show that the pool of 18-to 24-year…