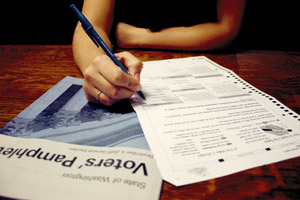 If you ever wonder why our state or a certain county provides ballots or elections material in some language besides English, it’s because we’re complying with a federal mandate resulting from the Voting Rights Act of 1965.

The minority language provisions of the Voting Rights Act were added in 1975. These minority language mandates are found in Section 203 of the VRA.  The way it works is that if at least 10,000 (or over 5 percent) of the voting-age citizens in a voting jurisdiction are members of a single language minority group and are limited-English proficient, that jurisdiction has to provide any registration or voting notices, forms, instructions, assistance, ballots and other  elections-related info in that minority language.

Currently, our state has four counties under minority language program: King, which provides election info in Chinese; and Adams, Franklin and Yakima, which have materials in Spanish. (Our state Elections Division provides voter registration forms in Cambodian, Chinese, Korean, Laotian, Russian, Spanish and Vietnamese, as well as in English.)

There is a good chance that as many as nine other counties soon could be added to the bilingual requirement: Benton, Chelan, Douglas, Grant, Okanogan, Pierce, Skagit, Snohomish and Walla Walla.  We could hear in late August or early September.  That’s when the U.S. Census director and Attorney General are expected to publish the news in the Federal Register, providing information on our counties’ demographics, including the numbers of people who speak languages other than English. (Check out the Census Bureau’s American Fact Finder, which provides population, housing, economic and geographic data.)

With this important development coming up, our Elections Division held a Minority Language Summit in Ellensburg this week to help counties get ready. The meeting included a presentation by federal compliance consultant Bruce Adelson and a discussion about what counties need to do to comply. About 50 county auditors and elections staffers joined Elections Division officials attended the training summit.

As we await the release of the Federal Register information, our office will be working on elections-related materials for affected counties so that can comply with the federal law.