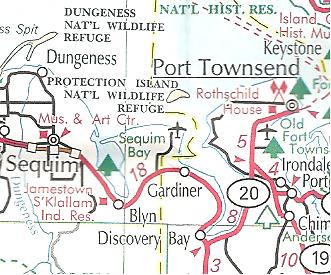 ISLAND OWNERSHIP IS IN DISPUTE

Will Require Some Time to Decide Puzzling Question–Bit of Water in Straits Said to Belong to No One.

PORT TOWNSEND, Thursday, April 9.–The hearing of the case involving which of the two counties, Jefferson or Clallam, is entitled to collect the taxes from the owners of Protection Island, which has been occupying the attention of the superior court here for the past week, with Superior Judge Albertson, of King County, sitting instead of Judge Still, came to a close yesterday afternoon after the introduction of an endless amount of testimony, ranging in scope and description from a single sheet of certified tax receipts to the professional opinions of civil engineers, as well as master mariners long operating in the waters of the Strait of Juan de Fuca.” 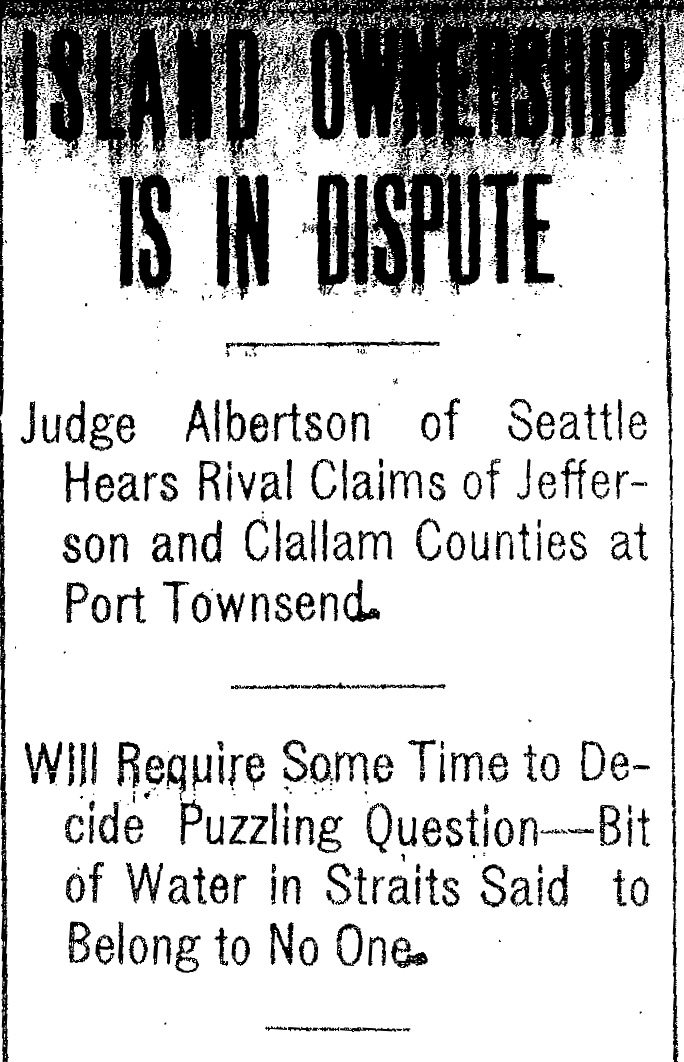 “According to prevailing opinion, the whole discussion hinges on the construction Judge Albertson will be called upon to place on the legislative enactment defining the boundaries between Jefferson and Clallam Counties, as to whether the use of the term ‘north’ in the paragraph means true or magnetic north. There is a material difference between the two.”

“Before terminating the hearing, Judge Albertson announced that he would take the matter under advisement owing to the fact that so many cited authorities had been introduced into the taking of the evidence and that it might be some time before he was prepared to announce his findings.”

“The precipitation of the present litigation recalls the fact that county boundaries are not the only ones over which some question might be raised in Washington. By a coincidence there is a point in the Strait of Juan de Fuca, not too distant from the little speck of dry land now in dispute, that neither Uncle Sam nor John Bull have any jurisdiction over.”

“This fact was brought out some years ago when the steamship Rosalie, with Capt. Charles W. Ames in command, was operating on the Sound-Victoria route. Coming over from Victoria one day, Capt. Ames had occasion to reprove one of the men aboard the boat for his actions, and the fellow, who was a much smaller man than the herculean master, believing that he was about to suffer bodily injury, drew a revolver and shot Capt. Ames through the shoulder. Fortunately, the bullet was only a flesh wound.”

“The man was arrested here on a charge of murderous assault, but was later discharged upon hearing for lack of jurisdiction. His attorney, after demonstrating the speed of the vessel, the time she had run and the distance covered, showed conclusively that the offense had not been committed in American waters. A similar complaint was accordingly filed in Victoria, and at the hearing the same procedure was followed in the investigation.”

No Punishment for Crime.

“At this hearing the exact designated international boundary line between the two countries was brought out from the government charts, and then the attorney for the defense sprang a great surprise by claiming that the offense, as alleged in the complaint, had not been committed within the jurisdiction of the British courts. Expert testimony, which was taken at length, finally proved beyond question that this contention was well founded, and the prisoner was discharged.”

“The only deduction to be drawn is that at some points in the Strait of Juan de Fuca there is a narrow strip of water, but in ‘no man’s land,’ and where almost any crime, even up to a capital offense, can be committed without fear of retribution at the hands of the court.”

“It is a very fortunate thing, be it said, that this strip of no country’s high seas is very narrow in width and short in length and could be located by no one but a man versed in the art of navigation. Few of these, in fact, know anything about the boundaries of the unusual strip of salt water, and it is said that Puget Sound mariners who know exactly where it is located, always ease her off half a point while crossing the Strait to avoid the place in which it has been legally proven is entirely without the pale of the law of any country.”

Protection Island was eventually award to Jefferson County. The problem might have started back in 1854, when Clallam County was carved out of Jefferson. There was an odd border arrangement just south of Protection Island. James G. McCurdy in By Juan de Fuca’s Strait (1937) explains:

“Living in that district was a family with a very sinister reputation. Even murder had been laid at its door. The people of Jefferson said very emphatically: ‘We don’t want that family of killers in our county– let Clallam have them.’ So the lines were run to eliminate the undesirables from the county in which they had so long been residents. At the time of the division, the population of Jefferson County was but 189 persons.”

The shooting of the Captain known as “Big Ames” aboard the Rosalie must have taken place between 1894-1897, when he was the skipper of that steamer. A couple months after the above 1908 article the International Boundary Commission was formed to finalize some of the irregularities of the Canada-U.S. border. Presumably if such a no-man’s strip of water really existed in Juan de Fuca as described in the Rosalie case, this Commission would have addressed that.