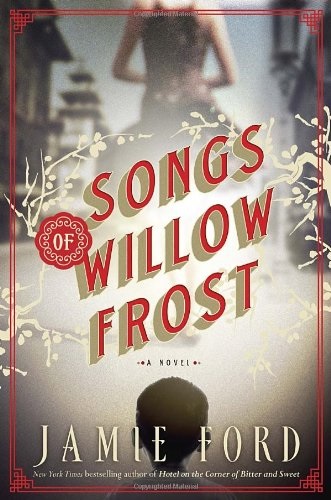 Our protagonist is William Eng, a 12-year-old living at the Sacred Heart Orphanage in 1930’s Seattle. He’s been there since he was seven; no one is interested in adopting a Chinese boy. Only, he remembers his beloved mother, a singer and a dancer, and he remembers finding her slumped in the bathtub, and how she was carried off to the hospital, and he never saw her again.

But now he sees her on the screen in a vaudeville show preview down at the local movie theater—he’s certain it’s her—and he sets off, together with the blind girl, Charlotte, fellow outcast, and his best friend, to find Liu Song, aka Willow Frost, his mother.

The book recounts this seemingly impossible quest, as well as Liu Song’s own tragic story, and how she came to give up her precious child. Will they be reunited to make a life together? We’re kept in suspense until the final page.

Full of old Seattle scenes and images, this poignant tale will tug at your heart-strings, while filling in a chapter in our nation’s regrettable history of the prejudice suffered by its people of Chinese heritage.

Available at the Washington State Library, NW 813.6 FORD 2013
Available as an eBook.
Downloadable talking book available through NLS and WTBBL.