From the desk of Jessica Aws, Library Associate at the Washington Corrections Center. 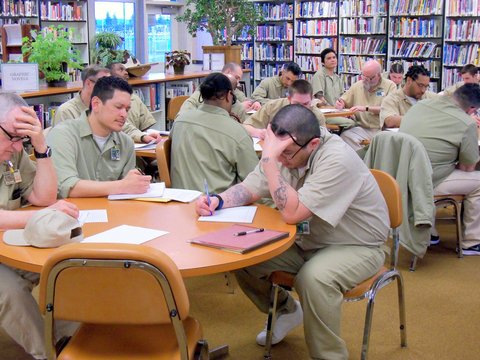 During April, the Washington Corrections Center Branch of the Washington State Library was a gathering place of poets. In celebration of National Poetry Month, the WCC library hosted a series of events aimed at encouraging artistic expression and building community bridges.

The events of the month kicked off with a poetry workshop that was facilitated by Suzanne Simons, a professor of Writing, Journalism, and Social Sciences at The Evergreen State College. Ms. Simons began the workshop by asking each of the 22 men who participated to introduce themselves and share what poetry means to them. Their words were powerful:

“Poetry is like breath. When I’m drowning in emotion…when I feel like I’ve dived down into a deep lake of it…when I start writing it feels like the first breath you take after being underwater for a long time.”

“Before, I had trouble expressing myself. I didn’t talk much. But then I started putting pen to pad and it gave me power. It gave me a voice.”

“I didn’t read much before I went to the hole awhile back, but when I was there I read a lot. I became a lover of words and a seeker of knowledge. When I write poetry, I try to capture the moment and bottle it up on paper.” 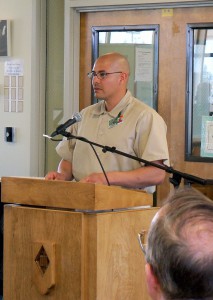 Over the course of two hours, as the men completed generative writing exercises and shared their work, the energy in the library was overwhelmingly positive and supportive. Every time one of the participants shared their poetry or gave a particularly insightful response, their words were greeting by a chorus of snapping fingers and murmurs of encouragement.

This atmosphere continued over the next several weeks, through two spoken word workshops taught by Christina St. Charles, a former theater student from The Evergreen State College. She has since begun a successful theater group at WCC. I don’t think the library has ever seen so much laughter, as the men good naturedly participated in voice exercises and tongue twisters. At the same time, I also don’t think that the library has ever seen so much raw emotion. At one point, one of the offenders read a poem that he had written while spending 27 months in solitary confinement. When he was finished, there were very few dry eyes in the group. “Most of us here can relate to those words,” one man said, “we’ve all been there. We’ve felt those emotions, and it takes a lot of courage to put that on paper, and even more to stand up in front of us all and say those words out loud.”

While every workshop was a resounding success, the real highlight of National Poetry Month at WCC was the Poet’s Open Mic event held on May 2nd, 2015. It was truly a community event, in which over 30 offenders, plus students and faculty from Suzanne Simon’s Poetry in Community class and DOC staff from several departments came together to share poetry in a positive and uplifting event that was “scandalous good” according to one audience member. 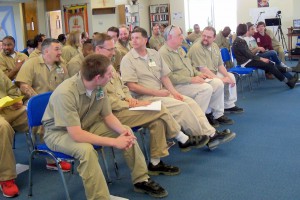 Throughout these events, what struck both staff and offenders alike was the ability for these men to be vulnerable. To be raw. To share things with each other that they never would have outside of these programs. “These events not only allowed us to open up for ourselves, but also made it possible for those of us who have lived such a segregated lifestyle to open up to others. Thank you for this source of freedom that many of us have not been able to experience in years!”