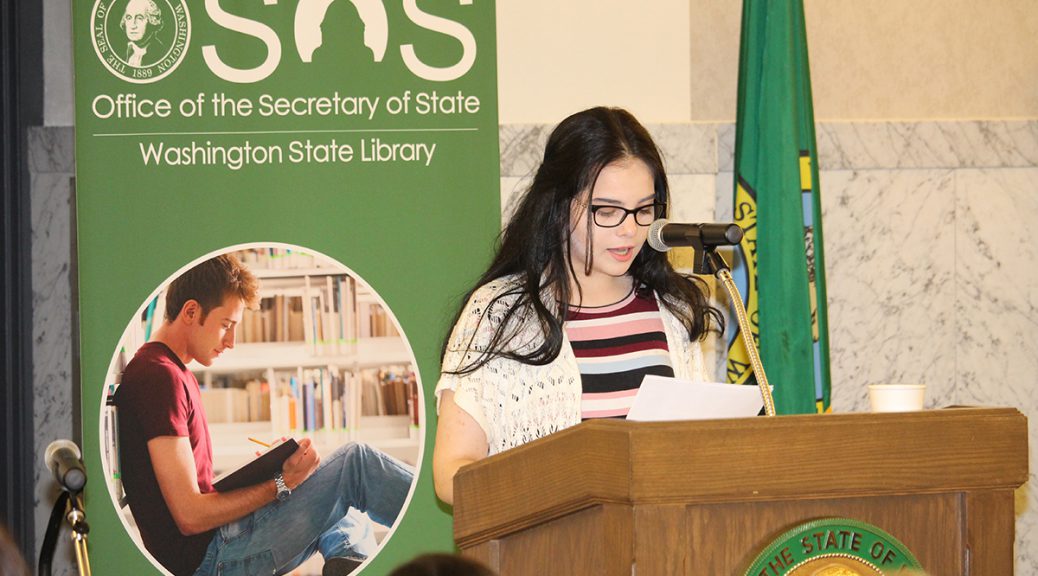 Three Washington students showed that the emotional power and inspiration of the written word is as strong as ever.

The three state champions in this year’s Letters About Literature contest read aloud their winning entries before a large audience in the Capitol Friday, sharing life lessons they learned from authors who inspired them.

Sponsored by the Washington State Library – a division of the Office of Secretary of State – and the Library of Congress, the competition encourages students to write letters to authors (living or not) of books that made an impact on them. Chosen from nearly 3,000 entries statewide, here are this year’s winners:

Before reading your book, I did not think very much about how Native Americans were treated back then, or even now. Now I think that the way they are treated now is still a bit like in your time. My school had an assembly when Billy Frank Jr. died a few years ago. I learned that he was a Nisqually Indian who got arrested over fifty times just for fishing salmon, even though the treaty gave him the right to fish in his land.

What is life? This is a question that many spend their entire career slaving over, never truly finding the answer. Scientists know what we’re made of, they know the chemicals and components in our bodies and in our brains, and they think they can give us the answer in a mathematical equation. But no, they’re all wrong. Life is so simple that it can be explained with one simple sentence, the sentence that you introduced to me in your book Looking for Alaska. By the end of this letter, I will have told you how your book gave me a refreshed outlook on my world with a simple phrase: “Everything that comes together must fall apart.”

“So many of the letters entered this year were very thoughtful and well written, not only those by the three champions but by all of the students who took part,” Aden said. “Letters About Literature demonstrates how books continue to inspire students and prompt them to think. Congratulations to all of the students who competed, and to their families!”

The awards ceremony was covered by TVW, which will have the event available for viewing online and on TV.

Nearly 3,000 Washington students submitted letters for this year’s contest. More than 2,900 letters advanced to the second round of judging and 82 semifinalists overall reached the third round. From the 82 semifinalist letters, judges selected three champions, three second place runners up, and 25 honorable mentions. The semifinalists received an award certificate in the mail.

Seventy-one schools from around the state had entries. The contest ran from September to January.

Students wrote a personal letter to an author, explaining how his or her work changed their view of the world or themselves. Students can write about fiction or nonfiction books, a poem, or a play.  They cannot write about song lyrics. National winners will receive a $1,000 cash award.

The Washington State Library and the Office of Secretary of State sponsored the competition as part of Washington Reads, which highlights books about Washington or the Pacific Northwest. The project is also sponsored by The Center for the Book in the Library of Congress. This is the 12th year that the State Library has run the contest in Washington.