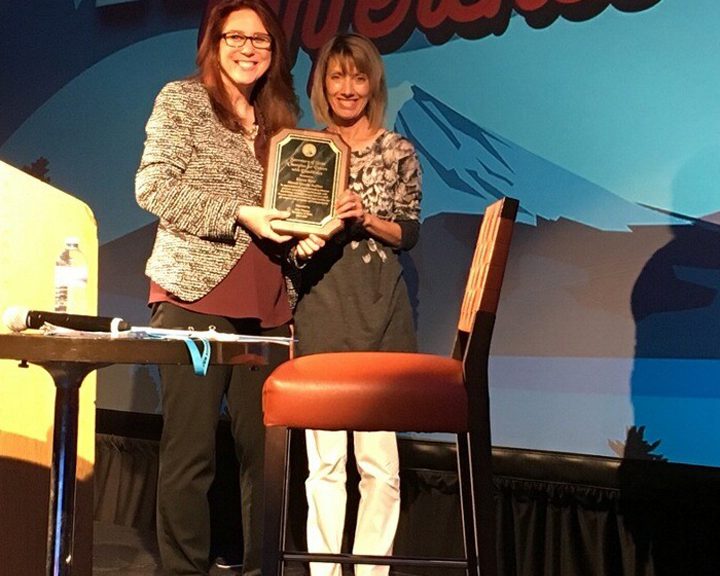 During the 2017 state Elections Conference this week at the Skamania Lodge, Secretary Wyman and many in our Elections Division are joining Washington’s county auditors and their elections employees to learn or share new ideas and practices that will allow them to run elections even better at the county and state levels.

• Pierce County Auditor  Julie Anderson received the Auditor of the Year award for her efforts to let the public participate in decisions like choosing ballot box locations.

“From open houses to community meetings, with the help of her team, she’s engaged the public in a new, fresh way,” Wyman said of Anderson. “And the key was that she’s engaged them from the beginning, not at the end when all the planning is over and the decisions were made!”

• Wyman presented the Voter Outreach Award to King County Director of Elections Julie Wise. Wyman praised Wise for not being afraid to try new innovative strategies to improve access, with an eye toward improving voter turnout.

“From the creation of a language services program, to the installation of dozens of new drop boxes, in her first term she’s tackled some giant projects,” Wyman said of Wise. “If that wasn’t enough, she instituted a prepaid postage pilot project, increased the languages served beyond the federal requirements, and embraced her community stakeholder groups.”

• Mason County Auditor Karen Herr (in photo above with Wyman) received the Champion for Voters with Disabilities Award.

Wyman said Herr has one of the most active disability advisory committees in the state: “Not only does this county hold regular DAC meetings, but they routinely attend the Secretary of State Disability Advisory Committee meetings, too, showing their commitment to improving access for voters living with disabilities.”

Wyman called Fundingsland “an expert, a leader, and a problem solver.” Wyman singled her out for going to other counties to help train new election administrators, and spending countless hours supporting the elections modernization project.

The annual conference is hosted by the Washington State Association of County Auditors.