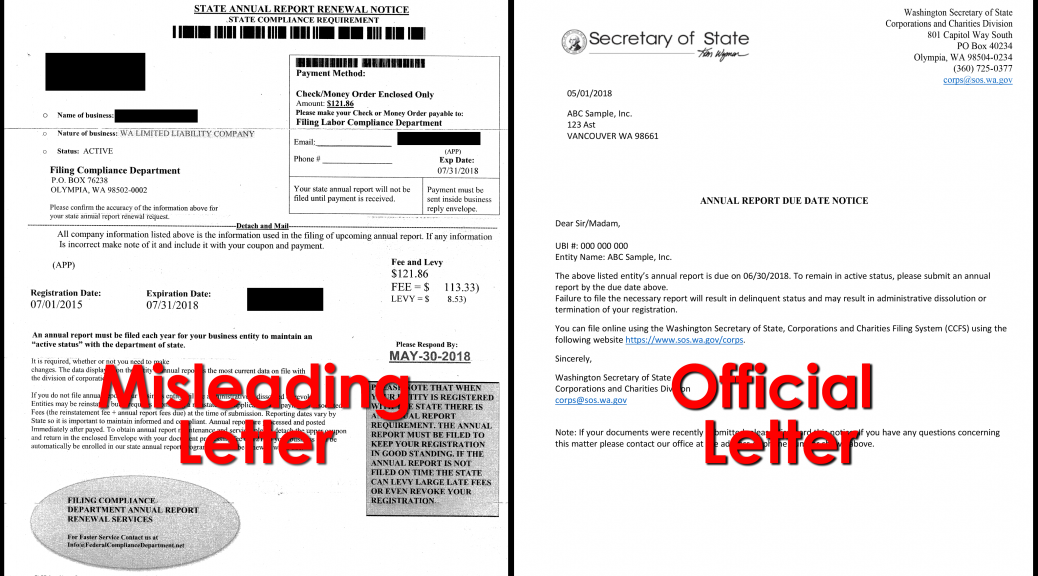 Recently, a pair of solicitations for money surfaced that insinuated connections to the Office of Secretary of State. Although each is easy to debunk with a little research, their appearance is a good reminder that if you have questions about a bill, check it out before you send a check.

In the first case, about which the Secretary of State has issued an official press release to raise awareness, an Edmonds business received a letter from a “Filing Compliance Department” that asked for a “fee and levy” to be returned to an Olympia post-office box, citing a “state compliance requirement.” The letter cited information from public records in the Secretary of State’s corporations database and told the recipient: “Your state annual report will not be filed until payment is received.”

Despite what a recipient might logically infer, this letter has no connection to the required annual report all Washington-registered companies must file with the Office of Secretary of State’s Corporations Division. As shown in the picture above, all actual corporate notification correspondence from the Secretary of State will have the office logo, and can be verified by contacting our Corporations Division at (360)725-0377 or corps@sos.wa.gov.

The second problematic solicitation we’ve encountered recently took the form of an email to a Legislator’s campaign.

It purported to be from Secretary of State office staff and included an image of the state seal (about which there are legal restrictions). In heartrending terms, the email described a dire medical condition suffered by 8-year-old “Dave,” who needed donations to defray the cost of traveling to the United Kingdom to consult a specialist.

The email claimed to have raised $6,500 toward a $9,000 goal through a linked GoFundMe page. However, no such campaign exists on the website now. Interestingly, its exact request, including the photo, is mirrored in this alleged Fundly fundraising campaign for “David” that the government of Winchester, Massachusetts, dealt with in June 2017.

If you encounter suspicious requests for money, you can contact the Attorney General’s consumer protection division or file an online complaint at atg.wa.gov/fileacomplaint.aspx. GoFundMe also requests to be alerted to suspicious activity via this page.