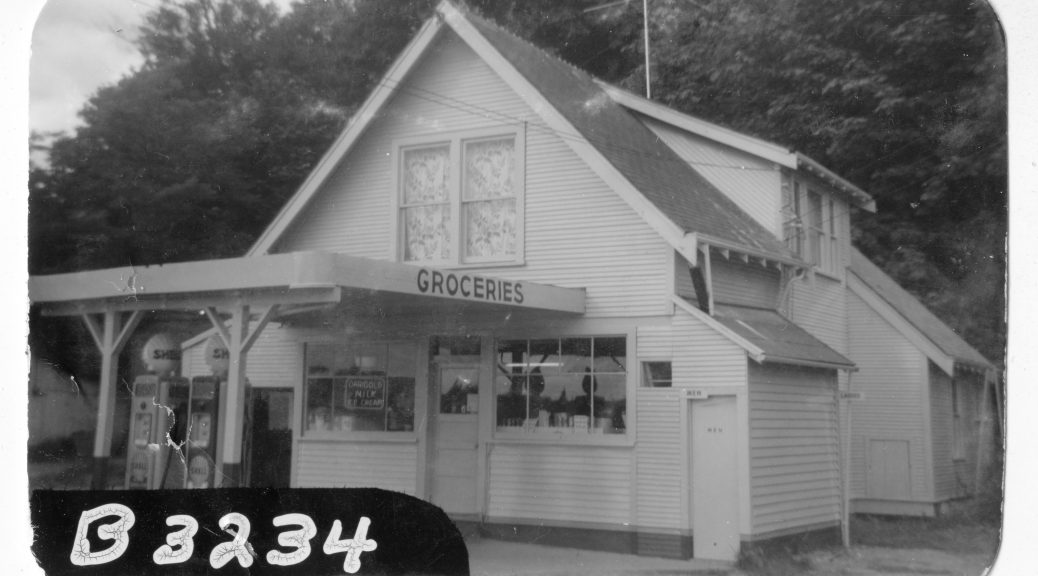 Black Lake Grocery has been a staple on the lake for more than 80 years, possibly over 90. If you have not visited the store, it is located on the west side of Black Lake, just off Black Lake Boulevard, in Olympia.

The store will soon shut down to repair damages caused by an automobile accident that occurred earlier this year. The wreck was caused by a 17-year-old driver whose 2004 BMW left the road at a high rate of speed and crashed into the small store in the wee hours of April 4th, according to the Thurston County Sheriff’s Office.[1]

A large white tarp currently covers the storefront, and the lot is partially closed off by a chain-link fence.

After the death of her husband, Ollie M. Wellman sold the property to Jessie and Paul Malleck in April of 1946.[3] The Malleck family ran the gas station for many years. Subsequently there have been several owners, including Robert F. Kissner, Thomas K. Boone, and Man Kyu Pak.

The Thurston County Assessor records indicate there was a new building constructed in 1961.[4] The simple cinderblock building is shown here in a 1965 tax photo.[5]

Several additions have been made to the building between 1966 and 1980 including the cooler on the south side, car port on the north side, and storage.

Also of interest to Olympians, Black Lake Grocery was a designated bookmobile stop in 1955. Residents gathered to meet the bookmobile from 10:00 to 10:15 a.m. on the second Monday of each month.[6]

The store will be closed for an unknown length of time, and will surely be missed by many local shoppers as it undergoes repair and the store is ushered into a new era.