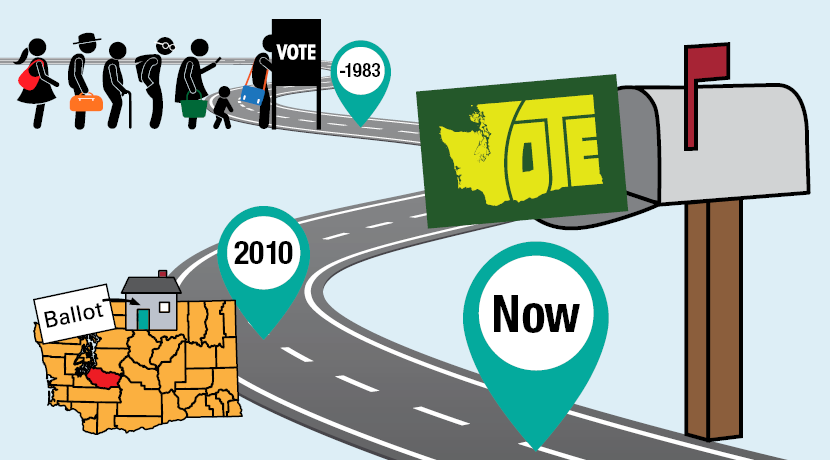 As we celebrate the centennial of women’s suffrage in the United States, it has become apparent that Washington state has always been ahead of the curve when it comes to voting rights and processes, and others have benefitted from seeing us set the pace and disprove false perceptions.

Over the last few decades, utilization and preference for Vote-By-Mail (VBM) elections has substantially increased to the point where in 2018 general elections across the country, over 31 million voters, or 25.8% of participants, cast their ballots by mail. Four states in addition to Washington have VBM as their primary method of voting, with more bipartisan interest growing every day.

Washington Secretary of State Kim Wyman says, “The right to accessible voting for all is fundamental to ensuring a fair democracy. With over 27 years of experience in elections administration, I have seen great strides taken to improve voter convenience, confidence, and participation, across party lines. Now, in large part because of our vote-by-mail system, Washingtonians experience unparalleled access to the ballot, while building in compensating security controls that give voters confidence in our elections. Constructing the long path that led us to this point was no small task to manage, however.”

View a graphic of Washington’s VBM timeline and processes online at https://www.sos.wa.gov/_assets/elections/wa_vbm.pdf

Before 1983, the state legislature had authorized “permanent absentee” status for voters with disabilities and those over age 65, with all other voters having to request an absentee ballot for each election in writing. The next step was for the legislature to allow locally regulated elections, to be conducted by mail with ‘yes/no’ questions or levies, or in precincts with fewer than 100 voters. Between 1985 and 1990, many jurisdictions — some countywide — were conducting special elections entirely by mail.

In 1991, the permanent absentee law was expanded to allow any voter to join the list by request. Once on the list, they would receive mailed ballots for every election. Absentee ballots grew popular because of their convenience and the opportunity they afforded voters to educate themselves on candidates and issues before marking their ballot. Over half of Washington’s voters signed up.

By early 1993 the decision was made with House Bill 1644 and Senate Bill 5819 to expand the small precinct VBM law to those with under 200 registered voters. Some counties began splitting precincts in order to be able to move towards all VBM elections.

Over 10 years later in 2005, the legislature established VBM as a permanent part of the election process for all elections, allowing counties to choose. Consequently, more than two-thirds of the state’s counties switched to VBM.

Then in 2011, with 38 of 39 counties moved to VBM, the Washington State Legislature enacted VBM for all elections statewide with Governor Gregoire’s signing of Senate Bill 5124, making Washington the nation’s second all VBM state behind Oregon.

Like all systems, there are pros and cons to VBM. The cost of constantly creating poll sites and training temporary poll workers is replaced with paying for printing, postage, and processing equipment. From managing contracts for quickly outdated voting machines, we transitioned to coordinating multiple print vendors along the West Coast in order to meet tight mailing deadlines. Instead of a chaotic day of long lines and onsite troubleshooting, we have weeks of processing, tabulating, and ballot curing. Some voters miss the camaraderie and receipt of an “I Voted” sticker, but more voters appreciate being able to vote on their own schedule with the option of voting in person should they want or need assistance. However you look at it, the benefits of VBM far outweigh any perceived shortcomings.

While some claim VBM has a greater likelihood of potential manipulation than traditional in-person poll voting, studies have shown no evidence of widespread or impactful fraud. Signatures on ballots are checked against voter records by trained personnel, databases are cross-referenced nationwide to avoid duplicate registrations, tabulation equipment is “air gapped” from any digital network, and legal penalties are in place for various forms of tampering or mishandling.

We live in an age where creating barriers, whether intentionally or not, and restricting access to the ballot in any way is not only irresponsible, but inexcusable. VBM levels the playing field without favoring any particular team or player, and it is the duty of all election administrators to provide every voter with an equal opportunity to voice their vote.